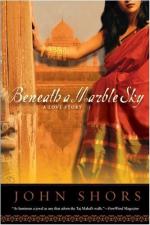 Beneath a Marble Sky: A Novel of the Taj Mahal Setting & Symbolism

The Peacock Throne was the raised dais in the reception hall, the Diwan-i Am, at the Red Fort at Agra, and was the ceremonial seat of power for the Mughal Emperors. The dais was surrounded by pillars that held a canopy. Atop the canopy was a gold peacock with jewel encrusted tail feathers.

The Taj Mahal is a massive marble structure built with Arabic, Persian, and Hindustani influences, which was commissioned by Emperor Shah Jahan as a mausoleum to honor his wife, Arjumand. Both the Emperor's and his wife's remains are there.

Islam is a monotheistic religion that holds as its central tenets submission to God, and acknowledgment of Muhammad as His final prophet. The Qu'ran, also spelled Koran, is the written word of Islam.

Hinduism is a polytheistic religion and philosophy that encourages belief in reincarnation, and the central and eternal...