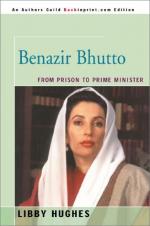 This detailed literature summary also contains Topics for Discussion and a Free Quiz on Benazir Bhutto: From Prison to Prime Minister by Libby Hughes.

Benazir Bhutto (1953-2007) was the first woman leader of a Muslim nation and a major, influential proponent of democracy and human rights in Pakistan until her death by assassination in 2007. Benazir Bhutto: From Prison to Prime Minister is a biography of Bhutto's life up to 1990, eighteen months into her first term as Prime Minister of Pakistan. It is short and clearly written for a young adult audience, with large text and definitions for a number of words that would be inappropriate for post-secondary students studying Benazir Bhutto's life. Readers should also know at the outset that the book is heavily pro-Bhutto and mentions very few criticisms of her family's rule and her own administration.

Benazir Bhutto was born to the politically powerful Bhutto family in 1953. Raised in a privileged and non-traditional Muslim household, she was encouraged to go to college at an early age, as her father, Ali Bhutto, had. Bhutto was born in Karachi, Pakistan and was familiar with only Pakistani culture. But her father had gone to college in the United States and encouraged his daughter to do the same. At sixteen, she was admitted to Radcliffe College at Harvard. After facing great culture shock, Bhutto quickly shed her shyness and became political active, particularly for equal rights for women. After college, she studied politics, philosophy and economics at Oxford and then spent a year studying international diplomacy.

During Bhutto's college and graduate school years, her father served as Prime Minister of Pakistan in the face of great opposition from non-democratic forces like the military. But when she returned to Pakistan after completing her Oxford degree, the military staged a coup and imprisoned her father. After two years of imprisonment, the military government, led by General Zia Ul Haq, executed Ali Bhutto. After her father's death, Bhutto's mother, Nusrat Bhutto, became the leader of the Pakistan People's Party (PPP), the party her father had formed. Benazir was a major party leader as well.

Over the years the two were imprisoned many times. Bhutto was treated brutally in prison for three years by General Zia before she was able to leave the country due to health problems in 1984. After settling in London with her two brothers, she set up a PPP headquarters and began to organize an underground movement for democracy in Pakistan, which she promoted to the international media.

Many in Pakistan opposed Zia, and Bhutto was able to increase opposition. In April 1986, Bhutto returned to Pakistan. Most of the public was happy with her return, and she demanded that Zia resign. In 1988, Bhutto ran for Prime Minister on the PPP ticket against General Zia and other candidates. When General Zia died in a plane crash during the campaign, it was clear that change was coming to Pakistan. And in November of that year, Bhutto was elected Prime Minister.

The book tells this basic story throughout the first nine chapters. In the tenth chapter, the author, Libby Hughes, reviews Bhutto's struggles to make democracy work in Pakistan by fighting corruption, illiteracy and inequality.