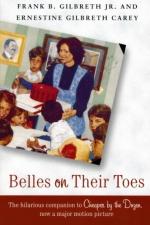 Belles on Their Toes Summary & Study Guide includes comprehensive information and analysis to help you understand the book. This study guide contains the following sections:

This detailed literature summary also contains Topics for Discussion on Belles on Their Toes by Frank Bunker Gilbreth, Sr..

"Belles on Their Toes" by Frank B. Gilbreth and Ernestine Gilbreth Carey tells the story of Lillian and her children. After her husband's death, the woman was left to earn the income for the family and raise 11 children on her own. This isn't easy to do at any time and much less in the pre-World II era when women didn't generally work outside the home, and certainly not in the field of engineering.

Three days after their father died, Mother had to go to Europe to lecture in place of their father and try to keep his business going. The 11 children in the family were on their own for a little more than a month, along with the handyman, Tom.

Since they didn't want the family split up, the children knew they had to do their best to keep the household running. They took the money that Mother left them and figured out a budget, cutting their expenses in half. Shortly after she left, all eleven of the children came down with chickenpox. They recovered well and kept things in order for the month. As they did during previous summers, they traveled to Nantucket to spend some time in the family summer home.

Things went pretty well on the island, although everyone was beginning to get a bit short tempered. Tom also ran into a minor problem with the law. Everyone was very happy to see Mother by the time she showed up. The older girls rejoined the social scene knowing that they were no longer in charge of the family. On the way back to their home in Montclair, Mother took the boys shopping, wearing out a sales clerk.

Mother was having a hard time breaking into the man's field of engineering. She decided to set up a Motion Study course in her home. She needed six students to sign up for the course in order for the family to remain together. Eight people signed up. Mother realized that one way she could break into the field was by designing kitchens since she was a woman. This idea went over well, and she got a lot of publicity.

As her name got out there, Mother was invited to speak about motion study at various institutions around the country. She used this money to pay for extras that were not part of the regular budget. The children understood what she was doing and they supported her. However, they didn't appreciate when she talked at their schools because she used personal anecdotes that came back to haunt them as their friends teased them. When Mother heard about what was going on, she promised not to tell any personal anecdotes any longer.

One by one, the children graduated from college, moved out, got married, and had children. They were concerned about Mother and how we she would survive with all of them gone. They wanted her to move in with one of them, but she insisted on living alone. Mother kept on working long past the age of retirement, and her children eventually realized that as much as she loved them, once was enough. She lived on her own by choice, continuing to travel around the country, lecturing.