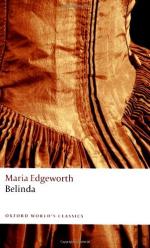 Maria Edgeworth
This Study Guide consists of approximately 88 pages of chapter summaries, quotes, character analysis, themes, and more - everything you need to sharpen your knowledge of Belinda.

This detailed literature summary also contains Topics for Discussion and a Free Quiz on Belinda by Maria Edgeworth.

Belinda is an English Society Novel written by Maria Edgeworth at the turn of the eighteenth to the nineteenth century, published in 1801. It tells the story of Belinda Portman, who has been sent by her match-making aunt to stay with Lady Delacour, in the hopes of finding a good husband. Belinda helps Lady Delacour to reform her ways, giving up a life of unrespectable behavior and frivolity for domesticity and happiness. Along the way, Belinda falls in love with Clarence Hervey, makes new friends and enemies, is courted by Augustus Vincent, and eventually ends happily married to Mr. Hervey.

When Belinda is sent by her aunt, Mrs. Stanhope, to stay with Lady Delacour, she soon realizes that Lady Delacour is not a good role model for a young woman. Lady Delacour is concerned only with popularity and the admiration of London's high society. She pretends to be bright and lively in company, but is very unhappy at home. She is also dying of a cancer in her breast, which has caused her to give up all hope that she could live a good life. As such, she has rejected domestic life, is estranged from her daughter, and argues with her alcoholic husband. Belinda, along with Lady Delacour's friend Clarence Hervey, determines that she will help Lady Delacour find happiness. As they proceed to do so, Mr. Hervey and Belinda fall in love.

Belinda manages to reunite Lady Delacour with her daughter, who has been staying with her aunt Mrs. Delacour, and the Percival family. Lady Delacour is delighted with her daughter, and this encourages her to make the effort to live. She agrees to see Doctor X, who has befriended Mr. Hervey and Belinda, and decides that she will submit to an operation at some point in the future. However, Lady Delacour and Belinda's enemies soon interfere. Philip Baddely, after being rejected by Belinda and losing Mr. Hervey as a friend, is determined to have revenge. He puts about a rumor, with the help of Lord Delacour's scheming servant Champfort, that Belinda is after Lord Delacour's money and title and intends to seduce him. When Belinda tells Lady Delacour about the rumor, she is furious. She has already been betrayed by one friend, Mrs. Freke, and this clouds her judgment. She accuses Belinda of all kinds of things, and Belinda immediately leaves her house.

Belinda goes to stay with the Percival family, who represent the perfect family and the ideal of domestic bliss. Here Belinda meets Mr. Vincent, who falls in love with her. She still holds feelings for Mr. Hervey, but by now she has heard many rumors that Mr. Hervey keeps a mistress, and has even seen him drop a lock of woman's hair from his pocket. She is persuaded by Lady Anne to allow Mr. Vincent's affections, and slowly Belinda grows to accept and love him, though she feels no passionate or romantic love for him. Then one day, Lady Delacour's servant, Marriott, arrives and begs Belinda to return home. They have discovered Mr. Champfort's part in starting the rumor and Lady Delacour is very sorry for having thought badly of Belinda.

Belinda returns and persuades Lady Delacour to be more open and honest. Lady Delacour immediately tells her husband the truth about her illness, who is relieved she has no secret lover - as he had thought - but is shocked that she is dying. He determines to do everything he can to help. Lady Delacour then brings her daughter Helena to her once again, and moves to a country-house to undergo the operation in hopes of saving her life. The surgeon looks at her and informs her that she has no cancer after all and will not need an operation. She had been fooled by a quack doctor into thinking she was dying so that he might continue to take money from her for treatments. Lady Delacour and her family are overjoyed, and the lady immediately begins to reform her ways, embracing a domestic life with her husband and daughter. She now turns her attention to trying to make Belinda happy.

Lady Delacour meets Mr. Vincent and likes him, but is suspicious of his friendship with her enemy, Mrs. Luttridge, who she knows has gambling tables at her house. Lord Delacour asks Mr. Hervey to spy on him, and he finds that Mr. Vincent has a gambling problem and has lost all his money. Mr. Hervey tries to help him, but Mr. Vincent keeps it a secret from Belinda and turns to a moneylender for funds. Mr. Percival discovers this and insists that Belinda be told. Belinda immediately breaks off the engagement.

Meanwhile, Mr. Hervey has problems of his own. He has been looking after a girl called Virginia since her grandmother died, trying to tutor her in order to be a perfect wife. He is now paying for this past mistake, as he does not love Virginia but believes that he has caused her to fall in love with him. He has also damaged her reputation, as she is believed to be his mistress. He feels guilty, and knowing that her happiness rests on him, he proposes to her. Virginia has been persuaded by her guardian Mrs. Ormond that Mr. Hervey loves and wants to marry her, and though she does not love him, she feels that she must say yes to prove her gratitude for his kindness. This messy situation is finally resolved when Lady Delacour manages to locate the man that Virginia does love, and Mr. Hervey finds that he does not need to marry her after all.

With both Mr. Hervey and Belinda finally free, Mr. Hervey declares his feelings for her. Lady Delacour wraps up the story by explaining that they are now happily married. The story is ended with Lady Delacour reformed, her family reunited, Belinda and Mr. Hervey together at last, and happiness for all the main characters.

More summaries and resources for teaching or studying Belinda.