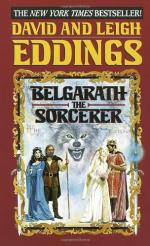 David Eddings
This Study Guide consists of approximately 42 pages of chapter summaries, quotes, character analysis, themes, and more - everything you need to sharpen your knowledge of Belgarath the Sorcerer.

This detailed literature summary also contains Topics for Discussion on Belgarath the Sorcerer by David Eddings.

Belgarath The Sorcerer is a novel about good versus evil in a fantasy setting, written by David and Leigh Eddings. Born thousands of years in the past, Belgarath was once a wandering orphan, and a petty thief who simply struggled to survive day by day. During his travels, he encounters an old man, who later turns out to be the God Aldur, who takes him in and teaches him the ways of sorcery, known as the Will. Belgarath becomes the God's first disciple, and six others soon follow: Belzedar, Belsambar, Belmakor, the twins Belkira and Beltira, and Beldin. Eventually, their god warns them that his brother, Torak, is going to be trouble in the near future, which proves correct when Torak arrives in their home in the Vale and steals The Orb, an artifact of great power, from Aldur. The disciples wander across the world gathering peoples and gods for war against Torak the Dragon-God. Belgarath goes to the Alorns, people of the Bear-God Belar. Along the way, he meets a she-wolf who accompanies him on his travels.

The war between Torak and the rest of the gods is a terrible ordeal. As Torak is nearly defeated, he uses The Orb to crack the earth, which nearly destroys it completely. Torak causes a giant earthquake and Belar and Aldur raise the ground to keep it from being flooded by an ocean. Belar and the Alorns vow to find a away across the ocean to continue their war, as Aldur and his disciples return to the Vale. Centuries pass, Belzedar disappears mysteriously and Belmakor and Belsambar both commit suicide in despair over what has happened to the world. Meanwhile, Belgarath marries Poledra, the she-wolf who eventually learned to change forms. Torak begins teaching disciples much the same way as Aldur did, and Belgarath spends his time maintaining peace in the Western Kingdoms.

One day, the king of Aloria, Cherek, comes to Belgarath with his sons and tells the sorcerer that he has found a way across to Mallorea, the land of Torak. Belgarath originally refuses to go, as Poledra is pregnant, but eventually realizes he has no choice in the matter and travels with them across to Torak's capital city. Though they face great danger, they manage to steal back the orb from Torak. Belgarath divides up the Alorns to protect the orb and returns home, to discover his wife died in childbirth. This drives him to grief, and he abandons his children for over a decade. When he returns, his daughter Polgara harbors a deep grudge for his abandonement, though his daughter Beldaran, loves him deeply and forgives his actions.

Eventually Beldaran must marry Riva, which pushes Belgarath and Polgara close together, and he begins training her as a sorceress. Centuries pass, and the two rescue the Rivan heir from an assassination attempt, hiding him on the mainland and preparing for a coming war between the Western Kingdoms. Finally, the great war comes, destroying the kingdom of Drasnia, but ultimately being decided in the confrontation between Torak himself and the Protector of The Orb, who mortally wounds the Dragon God. Mallorea collapses and more centuries pass as Belgarath and Polgara try to keep the heir safe and maintain peace throughout the Western Kingdoms, until finally the Child of Light is born.

More summaries and resources for teaching or studying Belgarath the Sorcerer.