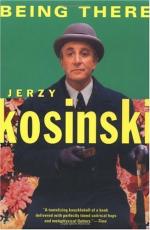 Being There Summary & Study Guide

Jerzy Kosiński
This Study Guide consists of approximately 68 pages of chapter summaries, quotes, character analysis, themes, and more - everything you need to sharpen your knowledge of Being There.

Being There Summary & Study Guide Description

Being There Summary & Study Guide includes comprehensive information and analysis to help you understand the book. This study guide contains the following sections:

This detailed literature summary also contains Topics for Discussion and a Free Quiz on Being There by Jerzy Kosiński.

Being There by Jerzy Kosinski is an allegorical tale about a man named Chance whose experience of the world is limited to his work as a gardener and what he has seen on television. Over the course of seven days, Chance leaves his employer and navigates his way through high society. His encounters with businessmen, world leaders, and the media are colored by his observations of life as seen in his former garden and on television.

On Sunday, Chance waters the garden. He has never left the house where he lives with his employer, the Old Man. The maid calls to Chance from the window and asks him to come upstairs quickly. The Old Man has died in his bed. Chance looks at the Old Man, mumbles goodbye, and leaves to watch TV. Later that same day, Chance watches as men carry out the Old Man's body.

In the morning, Chance meets with Thomas Franklin, a lawyer representing the Old Man's estate. He tells Chance that there are no records showing that Chance ever worked or lived there. Franklin interrogates Chance, attempting to confirm that he worked for the Old Man. Finally, he hands a paper to Chance, asking him to read and sign the document if he agrees to it. Because he cannot read or write, Chance pretends to read the paper, then hands the sheet back to Franklin and says he cannot sign it. Franklin tells Chance that he must move out by noon the next day.

Early Tuesday morning Chance packs his things. After one last visit to the garden, he steps outside and locks the gate behind him. As he is leaving, a limousine backs into Chance and pins him against another car. Seeing Chance's leg is trapped, the driver moves the car. A woman gets out and asks Chance to allow her husband's doctors to treat his leg. She introduces herself as Mrs. Benjamin Rand, but she is called EE. Chance introduces himself as Chance the gardener, but EE hears his name as Chauncey Gardiner. They arrive at the Rand home where Mr. Rand's doctor treats Chance. Later that night, Chance has dinner with EE and Benjamin Rand. Impressed by Chance's directness, Rand tells him that he wants his feedback on a new program designed to help the economy.

On Wednesday, the President of the United States pays a visit to Rand and Chance. As Rand and the President discuss economics, the President asks Chance for his opinion. Chance says that growth has its season in a garden. The President finds Chance's feedback very optimistic, and leaves to give a speech at the Financial Institute. During his speech, he includes a metaphor on gardening and the seasons. During the post-speech questions, the President mentions his conversation with Chauncey Gardiner on the benefits of inflation. Soon after, Chance is invited to appear on the "This Evening" television program to discuss the President's speech. The show producer picks up Chance and brings him to the studio. As the show begins, Chance is introduced as Chauncey Gardiner. The host asks him about the President's comparison of the economy to a garden. Chance says that everything in the garden will grow strong in due course. The host thanks Chance for his positive message as the audience applauds.

After arriving home from a trip, EE goes to visit Chance and tells him that she loves him. On Thursday morning, Chance finds out that Rand has fallen ill again. EE comes to Chance's room and asks if he will stay at the house indefinitely. She arranges for Chance to have a personal secretary.

Chance attends a United Nations reception as EE's escort. There he meets several diplomats, including Vladimir Skrapinov, the Soviet Ambassador. Skrapinov mistakes Chance's nonchalant responses for a love of Russian fables, as well as fluency in Russian. As Chance and EE are leaving the reception, they are surrounded by newspaper reporters. Chance tells them he only watches TV.

After seeing the press reports that refer to Gardiner, it occurs to the President that he should know more about him. He asks his secretary to get the information, but all she can find is a transcript of Gardiner's remarks on "This Evening". Meanwhile, Ambassador Skrapinov prepares a secret report on Gardiner. He calls Karpatov, chief of the Special Section, and requests all information on Gardiner.

EE and Chance go to her friend Sophie's house for dinner. After dinner, Chance heads upstairs with an older man and unwittingly watches while the man masturbates. Once he and EE return home, EE attempts to seduce Chance. He keeps saying that he likes to watch her. Finally EE begins to caress herself to the point of orgasm. She confesses to Chance he makes her feel good, and asks him to accompany her to the Capitol Hill ball.

Karpatov tells Skrapinov that despite their best efforts, they are unable to get any more information on Gardiner. Annoyed by this, Skrapinov contacts Sulkin in the Foreign Department to investigate Gardiner. In a private meeting with Skrapinov, Sulkin states that despite all of the technological analysis performed by his team, Chauncey Gardiner remains a blank page. It is Sulkin's belief that Gardiner represents an elitist faction planning to overthrow the government.

On Friday afternoon, the President's secretary reports that she has not found anything else. The President asks her to contact Walter Grunmann to continue the investigation. Shortly thereafter, Grunmann calls and says his team cannot find any record of Gardiner. He adds that while it is possible that Gardiner is a foreign agent, the complete lack of information is atypical for spies.

In a hotel suite, a group of men meet to discuss potential candidates for public office. A man named O'Flaherty recommends Chauncey Gardiner, for he has no background, comes across well on television, and appears to be one of them. At the Capitol Hill ball, a bewildered Chance heads to the garden, where he finally feels at peace.

More summaries and resources for teaching or studying Being There.

Being There from BookRags. (c)2022 BookRags, Inc. All rights reserved.