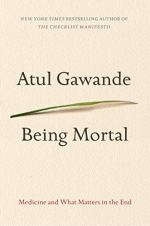 Atul Gawande
This Study Guide consists of approximately 41 pages of chapter summaries, quotes, character analysis, themes, and more - everything you need to sharpen your knowledge of Being Mortal.

Being Mortal Summary & Study Guide includes comprehensive information and analysis to help you understand the book. This study guide contains the following sections:

This detailed literature summary also contains Topics for Discussion on Being Mortal by Atul Gawande.

“Being Mortal” by Atul Gawande is an accounting of the care and treatment of the elderly and the dying as it has evolved over the last century to what it is today and could become in the future. In the United States in the early 1900s, old people who were sick and poor – most were poor and many were sick – were institutionalized in poorhouses which provided little care and largely accelerated the decline of the sick and old. There was a great contrast between the treatment of the elderly in America and in Asia and India, cultures that revere their elderly and take them into their homes until they require advanced care.

Before the mid-century hospitals had been used mainly as custodial institutions. After World War II hospitals began to be equipped with antibiotics and monitoring machinery and became care giving centers. The elderly who were hospitalized quickly became a thorn in the side of medical staffs. Doctors and nurses were trained to treat and cure people, fix them. But old dying people weren't fixable and were taking up valuable time and space with no good results – at least for the doctors and hospitals who became heroes to younger patients who feel the system saved their lives.

There was no place to put these elderly people who were not fixable until the federal government awarded grants to hospital to augment their facilities with a wing for the elderly. This was the green sprout of what later was to become the nursing home. Grant money was only available to facilities that met the standards set out by the government. Financially-challenged southern hospitals had a difficult time meeting those standards but, no problem, the government changed the law to state that the hospitals had to come near in meeting those standards. What resulted from this ambiguous piece of legislation were substandard facilities that morphed into what later became nursing homes, cold-hearted facilities that the elderly feared and detested.

Dr. Gawande is a general surgeon who took an interest in the care and treatment of the elderly. He relates his own experiences with his elderly patients. including his own father and younger patients who had terminal diseases. He began to recognize that once a nursing home got hold of a person that individual's wishes, dreams and desires no longer mattered. He found that many other like-minded professionals in the health care industry existed and were determined to change things.

Dr. Gawande reports on improved facilities like those that follow the assisted living model which is somewhere between independent living and the nursing home. Gawande also gives voice to the Green Houses developed by Dr. Bill Thomas who believed that by interjecting life – real life in the form of plants, pets and children – into nursing homes that the elderly could only benefit. Palliative care which focuses on what a terminal patient wants the rest of his life to be like is coming into vogue with more and more health professionals adhering to its ideology. The palliative caregiver focuses on removing as much pain and suffering from the patient as possible and finding out what he'd like to do with the rest of his life and trying to help him achieve those aspirations.

Assisted suicide may become more of an option in the future. However, it should never replace the responsibility of health care professionals to make the end-of-life experience satisfactory and a fitting conclusion to a life well-lived. There is hope for the aging, a group that includes everyone on earth. Doctors are beginning to recognize that not everyone can be cured and that some people just need comfort, kindness, attention and understanding and the chance to have purpose. Death waits for everyone of us but the pathway doesn't have to be wrought with misery and a loss of independence and purpose.

More summaries and resources for teaching or studying Being Mortal.

Being Mortal from BookRags. (c)2022 BookRags, Inc. All rights reserved.