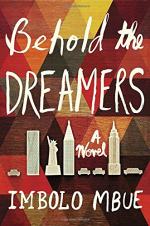 Related Topics
How Beautiful We Were

Imbolo Mbue
This Study Guide consists of approximately 67 pages of chapter summaries, quotes, character analysis, themes, and more - everything you need to sharpen your knowledge of Behold the Dreamers.

This detailed literature summary also contains Quotes and a Free Quiz on Behold the Dreamers by Imbolo Mbue.

Jende Jonga arrives at Lehman Brothers for a job interview for a chauffeur position. He is an immigrant from Limbe, Cameroon and with the help of his cousin, Winston, hopes to secure a good job for Clark Edwards, an investor with Lehman. Despite his anxiety about his language and job skills as well as his immigration status as an asylum applicant, Jende makes it through the interview and gets the job a few days later. He shares the news with Winston and they discuss his immigration lawyer, Bubakar. Meanwhile, his wife Neni goes shopping for designer knock-off bags with her friend Fatou. She reminisces on her arrival in America, three years after Jende with their son Liomi, on a student visa. She and Jende both have high hopes for their future in the United States.

Jende’s first weeks as a chauffeur for the Edwards are marked by his obsessive attention to detail and his attempts to keep Clark and his wife, Cindy, satisfied with his work. He keeps quiet while driving, but listens to Cindy’s distressed phone conversations with Clark and her friends about her eldest son, Vince, who canceled their vacation plans. He meets Clark’s secretary, Leah, who drills him for gossip on Clark and warns him that Lehman Brothers is facing trouble. The two laugh over Jende’s ignorance of Enron. That night, Neni helps Liomi with his homework before turning to her own. She is studying to become a pharmacist and stays up late many nights to study – something that the American students she encounters do not seem to do. Unlike Jende, her outlook on cultural differences is not as lighthearted and she is frustrated by the lifestyle of her American peers.

The Jongas are eating at Red Lobster when Jende gets a call from his brother in Cameroon and learns that his father has malaria. He sends them money and his father survives, but a few days later Jende learns that his asylum application has been denied. Neni struggles through the week, especially after a parent teacher conference in which she learns that Liomi has been joking around in class, and after she gets a B-minus on a precalculus exam. Her mood lifts soon after when she realizes that she has become pregnant, but Jende stays down, upset at the possibility of returning to Limbe. Bubakar reassures him that the deportation process can take up to thirty years, however, and he begins to relax.

Neni meets with her precalculus professor to improve her grade. When Fatou meets them at the café he reveals he is gay – much to Neni’s surprise. Fatou warns her to be honest with Jende about her whereabouts. That week, Jende is driving Cindy to work when he gets a call from his brother asking for money for his children to go to school. Cindy asks about it and gives Jende enough money for his brother and then some. Jende hesitantly decides to keep the extra money. He and Neni attend Winston’s birthday celebration at the Hudson Hotel several days later, and Neni feels extremely out of place among the white attendees. She asks Jende to leave and they walk to Columbus Circle and sit together.

Trouble begins to arise in the Edwards family as Lehman Brothers starts to go downhill and Vince decides to leave law school to move to India. Despite the trouble, Cindy decides to spend the summer at her vacation home in the Hamptons with her youngest son, Mighty, and hires Neni as a maid. Neni works hard and develops a strong bond with Mighty. One morning she discovers Cindy unconscious, apparently overdosing on drugs, and wakes her up after calling her friend Betty for advice. The following day, Cindy tells Neni about her poor upbringing and asks her to keep the drugs a secret. The summer continues without incident until Vince tells his parents he wants to go to India. Neni listens to Clark and Cindy fight in the kitchen and consoles her after he leaves. While his wife is away, Jende spends his time with Liomi.

Clark’s business and family life get worse and Jende starts to drive him regularly to the Chelsea Hotel. On one occasion, Jende picks him up and drops him at a pier. Clark asks him to come sit with him and the two watch the sunset together before Clark recites a poem. Neni continues to work occasional catering jobs for Cindy with another housekeeper, Anna. At a brunch event, Anna approaches Neni and asks her about Cindy’s alcohol use. She tells Neni to go alert Clark, but Neni backs out. Vince and Liomi come to the Jonga’s home for a Cameroonian dinner and they promise to spend more time with Liomi soon.

Lehman Brothers declares bankruptcy and Neni and Jende’s relationship becomes tense as her pregnancy advances into the third trimester. Jende listens intently to the conversations of his clients, who are worried about the economic recession and what it may mean for their lifestyles. Clark goes to the Chelsea hotel more often to meet escorts, and when he returns to the car without his tie one evening, Jende is worried that Cindy will notice. A week later, Cindy approaches Jende and asks him to log Clark’s whereabouts in a notebook, threatening his job if he does not comply. He consults Neni and Winston, who encourage him to blackmail Cindy about her drug use. Instead, he tells Clark about the notebook and he agrees that he can write down everything except the Chelsea Hotel. Clark and Cindy’s marriage grows stronger and Cindy happier until a tabloid article comes out that exposes Clark’s infidelity.

Neni gives birth to a baby daughter, Timba, three days before Jende gets a deportation order in the mail. Distressed, Neni goes to a church called Judson Memorial and, although initially disappointed, bonds with the congregants and the pastor, Natasha. She tells Natasha about Jende’s immigration case and the pastor offers her support. When she tells Jende about the encounter later that night, however, he becomes enraged at her for telling a stranger about his status. After Christmas Jende picks up Mighty for school, and the boy starts crying and telling Jende that his parents are fighting and trying to “get rid” of someone. Clark calls Jende into his office later that day and fires him. Jende finds two dishwashing jobs within the next weeks, but works twice as many hours for half the pay of the chauffeur job. His feet begin to hurt.

Neni goes to Cindy’s apartment and shows her a picture of her passed out on a bed, surrounded by pill bottles. Cindy tries to call the police, but Neni stands her ground and leaves the apartment with $10,000 in a paper bag. She tries to email Mighty after Anna tells her that Cindy spent the night crying, but it bounces back. Five weeks later, Cindy dies from asphyxiation related to drugs in her apartment. Jende attend the funeral and tries to console a guilty Neni. Her spirits are lifted when she receives an invitation to Phi Theta Kappa, even when the Dean of Students denies her scholarship nomination and discourages her from pursuing pharmacy.

Jende’s father dies in August and he sends money to Cameroon for the funeral. He develops severe pain in his back and goes to see a doctor who tells him it is stress related. He decides that he wants to return to Limbe, despite his wife’s wishes. Neni researches ways to stay in the United States and considers marrying a U.S. citizen and even putting Liomi up for adoption. She and Jende argue about leaving constantly, and one night he becomes so angry he beats her. Vince calls Neni from India and asks if she can help take care of Mighty, but she declines. As Jende’s voluntary departure is approved by an immigration judge, the family prepares to leave the United States. The novel ends as the family arrives in Limbe. Liomi wakes up in the back seat of their truck and asks if they are home.

More summaries and resources for teaching or studying Behold the Dreamers.