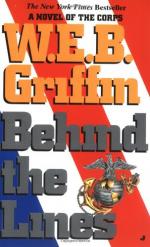 Behind the Lines Summary & Study Guide

W. E. B. Griffin
This Study Guide consists of approximately 21 pages of chapter summaries, quotes, character analysis, themes, and more - everything you need to sharpen your knowledge of Behind the Lines.

Behind the Lines Summary & Study Guide includes comprehensive information and analysis to help you understand the book. This study guide contains the following sections:

This detailed literature summary also contains Topics for Discussion on Behind the Lines by W. E. B. Griffin.

This book demonstrates the wry observation that "military literature is to literature as military music is to music." It proceeds with a great mechanical clattering and rumbling, like a Sherman tank plunging into battle. The author is adept at weaving an engaging narrative weighted down with the sort of procedural and descriptive detail that one might expect to find in the Marine Corps Field Manual. This deadening effect suffocates the kind of humor and irony, for example, that lifts the antiwar novel "Catch 22" to the status of absurdist masterpiece, or the lyricism that endows "A Soldier of the Great War" with the warm glow of profound humanism. Ultimately, the sensitive reader desires to know a great deal more about the characters and their motivations than the format of a military log book, which forms the structure of this novel can provide. However, for those readers fascinated with the minutiae of military life, the novel is convincing and even overwhelming in its detailed descriptions and coarse-grained narrative thrust.

The reader discovers that what goes on "Behind the Lines" is a maelstrom of internecine scheming, status-seeking, gossip, genuflecting to rank, and incestuous rivalry with a thick dollop of military protocol. Page after page of two-dimensional characters discuss their own careers, hopes for advancement, petty resentments and the minutiae of daily functioning in the Marine Corps. A clinical dysfunction and emotional paralysis seems to grip the principal characters. The reader may well see a parallel between the lives of these men of war and the classic, textbook dysfunctional family modeled on the alcoholic family. In this paradigm, the father (an alcoholic, a ranking officer, and politician) is an unpredictable person with the power to make or break the members of his family (regiment, unit, and patrol). The mother (co-alcoholic, and symbolic of most of the women in this book) is both victim and enabler who unwittingly perpetuates the disease of the alcoholic. The children (lower-ranked officers and recruits) fear and worship the father at the same time (ambivalence), which is a form of neurosis that renders them emotional zombies disconnected from their own feelings.

The book details the comings and goings of upper-rank Marine officers in the Philippines in the early days of World War II after the Japanese have overrun the islands and American fighting forces, plagued by a shortage of supplies and personnel, are reduced to defensive sparring. There is plenty of rank-pulling alongside an institutionalized deference for eccentricity in top brass, such as General Douglas MacArthur ("El Supremo") and even Brig. Gen. Wendell Fertig whose disdain for military life is coupled with his brilliance as a soldier. Fertig organizes a roan campaign of counter-attack deep in the tropical jungles that is not officially sanctioned and that raises many thorny questions about leadership and protocol. As a sort of protegée of the unpredictable General MacArthur, Fertig is a guerrilla fighter who commands his own militia and survives by his wits while ignoring military bureaucracy and field manuals. In this regard, MacArthur secretly admires Fertig, although he is irritated by his unconventional methods that hold up a mirror to his own style of fighting.

The thick layers of protocol and rank that suffuse the action in this book can make the prose nearly impenetrable to all but the most hardened career Marine Corps soldier. Perhaps this is nothing more than the author focusing on his "target audience" to the detriment of the general reader who may feel alienated from both character and plot as frustrations mount with the seemingly endless recitation of rank, privilege, paranoia and misplaced pride that hold the book together. With 80-something books in this and closely-related genres to his credit, W.E.B. Griffith is obviously prolific, but as in any mass-produced product, the reader may with good reason, question its quality.

More summaries and resources for teaching or studying Behind the Lines.

Behind the Lines from BookRags. (c)2021 BookRags, Inc. All rights reserved.