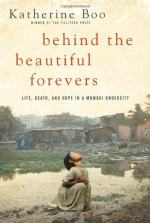 Behind the Beautiful Forevers: Life, Death, and Hope in a Mumbai Undercity Characters

Katherine Boo
This Study Guide consists of approximately 22 pages of chapter summaries, quotes, character analysis, themes, and more - everything you need to sharpen your knowledge of Behind the Beautiful Forevers.

Abdul Husain is a teenage boy living in the slum of Annawadi, in the city of Mumbai, India. He is a quick, clever teenager, who scavenges and steals in order to help provide a living for his family. Abdul's mother is Zehrunisa Husain, who handles the prices of Abdul's goods, and Abdul's father, Karam, who is slowly wasting away of tuberculosis. Abdul has eight other siblings, including his brother, Mirchi, and his sister, Kehkashan.

Abdul doesn't form friendships easily, and is suspicious of arranged marriages. He is interested in Western culture and technology, including iPods. Like most people in the slums, he hopes trade with the West, as well as economic liberalization, will bring up all the impoverished people of the slums, himself included.

Accused of being complicit in the death of Fatina, Abdul is imprisoned and beaten, but refuses to give a false confession. When he...

More summaries and resources for teaching or studying Behind the Beautiful Forevers: Life, Death, and Hope in a Mumbai Undercity.

Behind the Beautiful Forevers: Life, Death, and Hope in a Mumbai Undercity from BookRags. (c)2022 BookRags, Inc. All rights reserved.