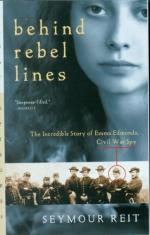 Seymour Reit
This Study Guide consists of approximately 27 pages of chapter summaries, quotes, character analysis, themes, and more - everything you need to sharpen your knowledge of Behind Rebel Lines.

This detailed literature summary also contains Topics for Discussion and a Free Quiz on Behind Rebel Lines: The Incredible Story of Emma Edmonds, Civil War Spy by Seymour Reit.

Behind Rebel Lines by Seymour Reit, tells the true story of Emma Edmonds, who in April of 1861, answered the rallying cry of President Abraham Lincoln, who called upon the young men of America to join in the Union effort during the Civil War. Emma was twenty-one at the time. She had a slender build and had short cropped hair. She was in the habit of wearing men's clothes. She was raised in St. John, Canada, and had worn men's clothes for years while working on the family farm. Emma felt the resentment of her harsh and remote father who had wanted a son. The fractured relationship between Emma and her father led her, at sixteen years of age, to run away from home. An idealistic young woman, Emma headed for the United States, a nation that stood behind their words of freedom and liberty.

Emma loved her new country, and when President Lincoln called on the young men of America to volunteer for the Army at the start of the Civil War, Emma decided she wanted to help the cause and to protect and save the nation that she had grown to love. Emma had always climbed the highest tree and rode the fastest horse. An inner voice told her that she would not be happy with typical jobs given to women during the Civil War such as rolling bandages, knitting socks or working in textile mills where blankets were made for the soldiers. She wanted a role that was more exciting and, in her mind, having more impact on the war effort.

Emma decided she would pose as a man and join the Army. When she stood in line at the recruiting station in Flint, Michigan, she feared she would be exposed as a woman. Fortunately, for her purposes, the Union Army was so desperate for able-bodied men that they had foregone the physical exam. After she faced the recruitment board and answered some basic questions, she was told she would be sworn in and be assigned as a field nurse in a hospital unit. These positions were dangerous because they were in the line of fire and were only given to men.

Emma's story soon departed from those of other Civil War era women who posed as men and joined the army. After a Union spy was captured and executed, she volunteered, using the identity of Pvt. Franklin Thompson, to take his place. For the next two years, she periodically volunteered or was recruited for subversive operations. Devising convincing disguises, she entered enemy lines as a black male slave, a black female slave, a heavy-set, middle-aged Irish female peddler, a "butternut" [butternuts were Kentuckians who sympathized with the confederacy] and a male civilian who rose in stature within Louisville society.

Through her various identities and disguises, Emma Edmonds was able to gather valuable intelligence for the Union commanders. The information she was able to obtain greatly contributed to their successful campaigns. After the war ended, Emma was given a honorable discharge from the army and a life-long pension. She was the only female member of a Civil War veteran's association that had over 400,000 members.

More summaries and resources for teaching or studying Behind Rebel Lines: The Incredible Story of Emma Edmonds, Civil War Spy.