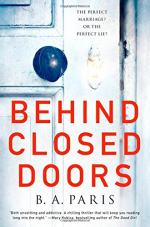 Related Topics
The Break Down

B. A. Paris
This Study Guide consists of approximately 52 pages of chapter summaries, quotes, character analysis, themes, and more - everything you need to sharpen your knowledge of Behind Closed Doors.

This detailed literature summary also contains Quotes and a Free Quiz on Behind Closed Doors by B. A. Paris.

B.A. Paris’s Behind Closed Doors, the reader is treated to a well-structured plot depicting a marriage that looks perfect on the outside but is actually hiding many secrets. The book is all told from a first-person point-of-view and alternates the present day marriage between Jack and Grace Angel with the past, including the months leading up to the marriage.

Grace Angel finds herself married to handsome lawyer, Jack. In the beginning he charmed her with his good looks and devotion to defending battered women, but mostly because if his devotion to her sister Millie, who has Down’s Syndrome. Soon after their wedding Grace finds that Jack is a psychopath.

As a child, Jack lived with a cruel father who kept his wife, Jack’s mother, locked in the cellar. Together, father and child tortured her and when Jack was a teenager, he murdered her and blamed it on his father. As an adult, he has searched for a woman he can lock away and torture in a similar way; he has decided that with Down’s Syndrome, Grace’s sister Millie is a perfect choice. Because their parents have no interest in them, Grace and Millie are easy to lose in the world.

While maintaining a persona as a brilliant and kind lawyer, Jack makes his marriage to Grace seem perfect by forcing her to appear doting and lovely in public with his friends. At home, he keeps Grace locked in a small room and only periodically feeds her. Early in the marriage, she tried to escape, but Jack made her life smaller and smaller. His goal is to keep Grace around until Millie ages out of her school, in a short number of months.

Grace feels like their new neighbor, Esther, may see more into their marriage than others do, but she cannot be sure and she cannot risk saying something to Esther and getting into trouble with Jack.

Eventually, Millie also confesses that she knows Jack is bad. One day she smuggles a handful of sleeping pills to Grace and encourages her to use them on Jack.

Although the pills give Grace some hope that she will be able to escape her husband, it is difficult to plan to overpower him. Luckily, he is involved in a high profile, time-consuming case that, as court draws nearer, starts to wear on his mind. Grace uses it to her advantage, luring him into her room for a nightly chat over a glass of whisky as they discuss the case. Grace feels like she has time, but when Millie comes to their house for a birthday party, Jack is reluctant to let Millie leave, and wants to have her move in sooner. As soon as the court case is over, he promises, they will make it happen. Grace feels the pressure of a deadline.

The day the case is decided, Jack comes home telling Grace to get ready to go to Thailand, and when they return they will get Millie. Grace manages to dump the crushed sleeping pills in Jack’s whisky, and then she lures him to the basement. “Millie’s Room” is a horrifying, windowless room that locks from the outside and is painted all red. Additionally, the walls are covered with grotesque paintings of Jack’s former clients, battered and bruised. Although Jack intended the space for Millie, Grace lures him into the room and locks him in. She takes the flight to Thailand alone, telling everyone they know that Jack urged her to take their vacation so he could spend a few days finishing up the court case he had just lost. Grace tells Esther that Jack plans to join her in a few days.

Of course, Jack never shows up. In the meantime, Grace calls him often and leaves him messages, allowing everyone in the hotel to see her seeking after him. Eventually the London police get involved and find Jack dead from dehydration in the basement. Grace rushes home. Esther picks her up at the airport and, over coffee, coaches her on what she should say to the police to get away with the murder.

More summaries and resources for teaching or studying Behind Closed Doors.