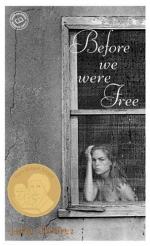 Before We Were Free Summary & Study Guide

Julia Álvarez
This Study Guide consists of approximately 25 pages of chapter summaries, quotes, character analysis, themes, and more - everything you need to sharpen your knowledge of Before We Were Free.

Before We Were Free Summary & Study Guide Description

Before We Were Free Summary & Study Guide includes comprehensive information and analysis to help you understand the book. This study guide contains the following sections:

This detailed literature summary also contains Topics for Discussion and a Free Quiz on Before We Were Free by Julia Álvarez.

"Before We Were Free" by Julia Alvarez tells the story of a young girl named Anita. She lives during a period of political unrest. Her father and uncle are involved in a plot to assassinate the dictator.

When the story begins, Anita is eleven years old and she lives in the Dominican Republic. Anita attends an American school and she is friends with the children of American Ambassadors and consulates. She lives on a compound with her parents, cousins, aunts, uncles, and her former nanny. While she is looking forward to turning twelve and becoming more grown up, there are other changes occurring in her life that make her twelfth birthday somewhat insignificant.

Her cousins suddenly leave for the United States of America and another uncle is missing. The secret police invade her family's compound and the children are restricted from their regular activities. Americans move in to an empty house on the compound, making things a bit better and the Americans hold a big party for their daughter's fifteenth birthday. Meanwhile, men gather and hold secret meetings. El Jefe shows up at the birthday party and shows interest in Anita's sister so her parents send her sister to the United States to keep her safe.

Everybody seems to have secrets and Anita's life keeps changing. Her school closes and Anita discovers that she has a hard time finding words to say what she thinks so she becomes more withdrawn. One evening she comes home to find her house swarming with men on a mission. They are planning to assassinate El Jefe that night.

They succeed in killing El Jefe, but the man who is supposed to announce that the dictator is dead never shows up so the general public isn't aware of their newfound freedom. This gives El Jefe's son time to rise in power, and he is even more cruel than his father. He is determined to seek revenge on those who killed his father, and his men tear through the compound, taking Anita's father and uncle away as prisoners.

Anita and her mother go into hiding in the home of their friend who works in the Italian Embassy. Anita's brother had left the compound earlier and he was at greater risk. He sought refuge in the Italian Embassy itself. Anita and her mother lived in a closet for several months, hiding from the secret police. During this time, Anita keeps a journal chronicling her experience.

One day, after months in the closet, she and her mother are rescued by paratroopers and helicopter. They leave the country and join their relatives in New York City, where they have to adapt to a very different culture. While she is in New York, she learns that her father and uncle were killed. Anita has to come to terms with the idea of what freedom really means. Her father told her that he wanted her to be free and to fly. As she thinks over all her family has been through, Anita discovers that freedom and the ability to fly lives within her.

More summaries and resources for teaching or studying Before We Were Free.

Before We Were Free from BookRags. (c)2022 BookRags, Inc. All rights reserved.