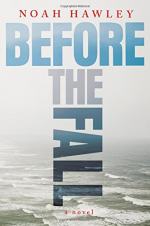 Before the Fall Summary & Study Guide

Before the Fall Summary & Study Guide includes comprehensive information and analysis to help you understand the book. This study guide contains the following sections:

This detailed literature summary also contains Quotes and a Free Quiz on Before the Fall by Noah Hawley.

Note: Citations in this study guide refer to the May 2016 Hachette Book Group/Grand Central Publishing First Edition of Before the Fall.

Before the Fall is a contemporary thriller by Noah Hawley in which plane crash survivor and artist Scott Burroughs attempts to recall the events leading up to the crash and to deal with its aftermath. When the novel begins, Scott is a last-minute addition to a private flight from Martha’s Vineyard to New York, chartered by millionaire conservative news magnate David Bateman, his wife, Maggie, and their two children, Rachel and JJ. David, though much older than Maggie, has a good marriage and is very close with his children despite wishing he was home more. Maggie, however, has secretly become enamored with Scott, though she explains to everyone he is a friend whose art she is enthusiastic about.

Friends of the Batemans, private investment firm owner Ben Kipling and his wife, Sarah, are also invited along before the flight. Sarah has accepted the invitation at Maggie’s insistence for an enjoyable flight back to New York together, while Ben hopes to ask David’s advice on how to handle an indictment about to be served to him by the FBI for dealing with dirty money. The plane is watched over by Israeli-American private security man Gil Baruch, who along with a security unit was hired by the Batemans for protection after Rachel was kidnapped some years before. Gil and the Bateman family are close, and trust one another completely. The private OSPRY plane is piloted by a longtime captain, James Melody; copiloted by thirty-year old Charlie Busch; and is tended to by Emma Lightner, a flight attendant in her mid-twenties. Sixteen minutes into the flight, the plane crashes into the sea. Scott surfaces, unable to clearly recall the preceding few moments, and discovers only one other survivor–the four year-old JJ. With JJ in tow secured to a seat cushion flotation device, Scott swims to shore and washes up on Montauk on Long Island.

Gus Franklin, who handles transportation disasters for the federal government, immediately responds to the crash. There are no other survivors. Gus spends the next few weeks piecing together the wreckage of the plane and trying to determine what happened while befriending Scott and urging Scott to try his hardest to recall the past. JJ is sent to live with his compassionate aunt and stands to inherit over $100-million. Scott spends time visiting JJ while doing his best to avoid the media as much as he can. Scott himself comes under investigation when it is discovered that his latest paintings all feature disasters, including a plane crash. Scott is finally forced to confront the public to explain the paintings, saying they are a reflection of his own life which has largely been a waste until recently, and that the paintings present the undeniable truth to people–that one day, everyone dies.

Gus, in the meantime, begins piecing together the lives of the people who were on the plane, especially when the bulk of the wreckage is found with bullet holes in the cockpit door and the dead pilot on the wrong side of the cockpit door. The data and voice recorders of the plane are recovered and decoded. As this occurs, Gus learns that Charlie Busch had been a screw-up as a kid but had apparently been set on the right path by his uncle, a U.S. Senator. As it turns out, Charlie was in an abusive relationship with Emma, where Charlie was the abuser. Charlie’s toxicology report tests positive for alcohol and cocaine, meaning he was flying high and drunk. Emma resisted Charlie’s advances the day of the flight and even slapped him across the face. The data and voice recorders reveal that the pilot left the cockpit to deal with a nosebleed, during which time Charlie began calling Emma a bitch over and over before deliberately crashing the plane into the ocean.

Before the Fall from BookRags. (c)2022 BookRags, Inc. All rights reserved.