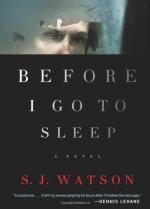 Before I Go to Sleep: A Novel Summary & Study Guide

S. J. Watson
This Study Guide consists of approximately 31 pages of chapter summaries, quotes, character analysis, themes, and more - everything you need to sharpen your knowledge of Before I Go to Sleep.

Before I Go to Sleep: A Novel Summary & Study Guide Description

Before I Go to Sleep: A Novel Summary & Study Guide includes comprehensive information and analysis to help you understand the book. This study guide contains the following sections:

This detailed literature summary also contains Topics for Discussion and a Free Quiz on Before I Go to Sleep: A Novel by S. J. Watson.

Before I Go To Sleep is the debut novel of English writer S.J. Watson. In this novel, Christine Lucas wakes every morning thinking she is a carefree, twenty-something woman with a bright future ahead of her. In reality, Christine is a forty-seven year old woman who suffered a terrible attack eighteen years ago that has left her unable to retain memories. However, with the help of a doctor who specializes in memory disorders, Christine begins to keep a journal that helps her piece together her past and how she ended up as she has. Before I Go To Sleep is a thriller that will leave the reader guessing until the final sentence.

Christine Lucas wakes in a strange bed beside a man she does not recognize. In the bathroom, Christine finds pictures taped to the wall of herself as a much older woman and the man in the bed who tells her he is her husband. Christine is shocked and frightened, especially when a glance in the mirror tells her that the pictures are accurate even though she is convinced she is only twenty-five, not forty-seven. The man in the bed tells her he is her husband Ben, that they have been married for many years, and that she had an accident that has left her unable to retain new memories.

After Ben leaves for his job as a teacher at a nearby school, Christine receives a call from a stranger who tells her he is Dr. Nash, a man who has been helping her attempt to recover some of her memories. Dr. Nash picks Christine up and takes her to a local park where he explains their work together and shows her a journal she has been keeping for several weeks. Dr. Nash explains that Christine asked him to read the journal a few days earlier. Dr. Nash asks Christine to read the journal and then to contact him should she want to continue with their work.

Christine begins to read the journal. The first few entries introduce Christine to her husband, Ben, and the work she has been doing with Dr. Nash. In these early entries, Christine learns that she and her husband went for a brief visit to a park and the sight of fireworks caused her to have a flash of memory that included a woman she instinctively knows as her best friend. The memory takes place at a party when both women were in college. In this memory, the woman prepares to introduce Christine to a man with whom she thinks she might be compatible . Christine becomes frustrated when she cannot recall the woman's name.

A few entries later, Christine learns that Dr. Nash took her to a home she previously shared with her husband. In the kitchen of this home, Christine has a memory of an afternoon tryst with her husband. This memory makes Christine feel happy because she had been frustrated before when she could not remember anything about her husband. This one memory expands later to help Christine recover the memory of having written a novel in her past. Christine asks Dr. Nash about this and he gives her a copy of her novel along with a press clipping he has found. As Christine looks at the press photo, she suddenly recalls having had a son named Adam. However, when Christine asks her husband about her child, she learns that he was killed in Afghanistan.

As Christine struggles with the loss of her child each day that she reads about it in her journal, she becomes aware of lies Ben has told her over the past few weeks. Dr. Nash makes excuses to her about this, but Christine struggles to trust Ben. Then Christine remembers the name of her best friend and learns that she has left a number for Christine at the facility where she lived for years after her injury. Christine meets with her friend and is given a letter from Ben explaining why he divorced her several years ago. Christine is touched by the letter and decides to tell her husband everything.

Christine has reached the end of the journal. Comforted by what she has read, Christine prepares to go on a short vacation with her husband. However, when they arrive at their destination, Christine realizes that Ben has taken her to the same hotel that was the scene of the attack that left her with her memory loss. In Ben's luggage, Christine finds several pages from her journal and discovers that they hold the secret to her current circumstances. It turns out that Ben is not Ben, but a man named Mike with whom Christine had a brief affair eighteen years ago. With this knowledge, Christine suddenly remembers the attack, remembers that Mike did this to her. Christine fights valiantly when Mike comes into the room and somehow survives, memory intact. However, no one knows if she will still remember after she falls asleep.

More summaries and resources for teaching or studying Before I Go to Sleep: A Novel.

Before I Go to Sleep: A Novel from BookRags. (c)2022 BookRags, Inc. All rights reserved.