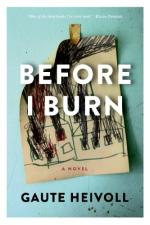 Before I Burn Setting

Before I Burn takes place in Finsland, Norway, in the southern part of the country. It is a rural area that is dotted with farms and small communities. The region was beset by a series of arson fires during May,1978.

Ingemann was the fire chief for the rural region where he lived in southern Norway. He was in charge of the fire equipment and the fire engine that was kept in a firehouse near his home. From a young age, his son Dag would ride along with him to fires in the fire truck.

Gaute left his hometown when he was nineteen to attend a university in Oslo. He felt that it was where he belonged. He thought that he’d live the rest of his life in Oslo. He had initially entered law school; but, he eventually decided to become a writer.

Before I Burn from BookRags. (c)2021 BookRags, Inc. All rights reserved.