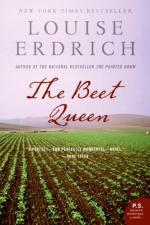 Louise Erdrich
This Study Guide consists of approximately 52 pages of chapter summaries, quotes, character analysis, themes, and more - everything you need to sharpen your knowledge of The Beet Queen.

This detailed literature summary also contains Related Titles and a Free Quiz on The Beet Queen by Louise Erdrich.

The Beet Queen is a critically acclaimed novel that follows the lives of Mary and Karl Adare after their mother abandons them at a fair to benefit orphaned children. After this shocking abandonment, Mary settles in the small North Dakota town of Argus with relatives while Karl chooses a more transient lifestyle. Their lives will intersect at various points, weaving events that will conspire once again to make them a family. It is a novel of inspiration, of love, and of forgiveness that will warm the heart of everyone who reads it.

Adelaide Adare has lived on a farm in Minnesota for many years, sharing her life with a married man who is the father of her two children, Karl and Mary. When Adelaide's lover dies, she is forced to leave behind everything she has counted on most of her adult life. Adelaide moves her children to a small apartment in Minneapolis where she learns that she is pregnant. Adelaide sells everything of value she owns in order to provide for her children. When that money is gone, Adelaide steals silver spoons from her landlady. After the birth of her baby boy, the landlady discovers this theft and tells Adelaide she and her children must leave by the end of the month. After a disheartening day of searching for housing, Adelaide takes the children to a fair, pays for a ride in a plane, and never returns.

Although Mary is the younger of the two older children, she takes charge of the situation. The baby is soon hungry and begins to cry. A kind man comes over and says that his wife just had a baby and could feed the little one. At first, Mary resists, but she trusts the man to bring her brother back. However, he does not. That night, Mary and Karl go home one last time. In the morning, they hide in a boxcar for the ride to Argus, North Dakota and the home of their mother's sister, Aunt Fritzie. Once there, however, Karl leaves Mary to find his own adventure. Mary is welcomed into the Kozka family by everyone but her cousin, Sita. Sita is jealous of Mary, jealous of the attention that her parents give to the orphan, and jealous that Mary has stolen her best friend. Things do not improve at school; especially since Mary becomes a local celebrity that winter when she falls off the slide and creates a face in the ice that appears to be the face of Christ.

Karl has not found the same sort of acceptance his sister has. Karl meets a man on the train that he hopes will care for him, but when he does not get a return on the affection he offers, Karl jumps off the train, breaking both his ankles. An Indian woman comes along and nurses him back to health only to drop him off at a monastery. The priest sends him back to Minneapolis where Karl grows up in the same orphanage that the fair he attended with his mother was created to benefit. Karl is a difficult child and when he reaches the appropriate age, the orphanage is glad to see him go. Karl becomes a traveling salesman, selling a variety of wares throughout his thirty-year career.

Several years later, Mary learns that her mother is still alive when her aunt shows her a postcard that Adelaide sent her. Mary takes the postcard and sends her mother a reply, telling her that all of her children have starved to death. Shortly after this, Fritzie becomes ill and is told to move south to ease her breathing. The butcher shop that Fritzie and her husband own becomes Mary's responsibility because Sita is not interested. Sita moves to Fargo in order to become a model for a large department store. Many years later, a letter comes to the butcher shop addressed to the Kozka's. Mary forwards this to Sita. The letter turns out to be a response to some ads Fritzie ran in the Minneapolis papers after Mary came to live with them looking for news on Adelaide or the baby. This letter is from the woman who adopted the baby. Sita goes to Minneapolis to see the boy, but does not speak to him. Later, she goes to the pawnshop where Adelaide pawned her jewelry and retrieves the necklace.

Karl meets a man from Argus at a farmer's conference where he is selling a seeder. The two men spend the evening together and Karl falls from the bed, injuring his back. The man, Wallace Pfef, stays with Karl for a short time but does not expect to see him again. Several years later, Karl shows up on his doorstep. They live together for two weeks. Later, Wallace learns that Karl moved in with Celestine James, Mary's best friend. Months later, it is obvious that Celestine is having Karl's baby. Wallace finds himself in the position of delivering Celestine's baby. Soon, despite Wallace's jealousy over Celestine's relationship with Karl, which does not exist after the baby's birth except on paper, Wallace becomes a surrogate father to the baby.

Mary, too, becomes very close to the baby—so close that she often steps on Celestine's toes when it comes to the child, Dot. Once, Mary even went to the school and locked the teacher in a toy box because Dot convinced her that the teacher had locked Dot in the same box. Dot is a spoiled, temperamental child who injures a child during a Christmas play because he would not cooperate with her. Sita, who has been married and divorced during this time, has remarried after a disastrous turn at restaurant ownership and is fighting a battle with mental illness. Sita attends a birthday party Wallace throws for Dot and finds herself buried in cake after Mary, who Wallace has gotten drunk to calm her forceful personality, over winds the cake plate and causes it to become dysfunctional.

When Dot is a grown woman, she has many dreams, but she is angry and seems to resent the entire world. Wallace gets it into his head that if he arranges for a few of her dreams to come true, she will become more confident and less aggressive. To do this, Wallace organizes a festival to celebrate the sugar beet that he has brought to the area and that has made the area prosperous. At this festival there is to be a royal court and a queen. Wallace fixes the ballots so that Dot is made queen. When Dot learns the truth, she becomes angry, running off and boarding a plane much the way Adelaide did. However, unlike Adelaide, Dot comes back to face her family.

More summaries and resources for teaching or studying The Beet Queen.

The Beet Queen from Gale. ©2005-2006 Thomson Gale, a part of the Thomson Corporation. All rights reserved.