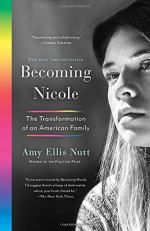 Nutt, Amy Ellis
This Study Guide consists of approximately 38 pages of chapter summaries, quotes, character analysis, themes, and more - everything you need to sharpen your knowledge of Becoming Nicole.

Becoming Nicole: The Transformation of an American Family Summary & Study Guide includes comprehensive information and analysis to help you understand the book. This study guide contains the following sections:

This detailed literature summary also contains Topics for Discussion on Becoming Nicole: The Transformation of an American Family by Nutt, Amy Ellis.

The following version of this book was used to create the guide: Nutt, Amy Ellis. Becoming Nicole: The Transformation of an American Family. Random House, 2015.

The book follows Nicole Maines through her first 18 years of life. Nicole was born on October 7, 1997, ten minutes before her identical twin, Jonas. Her adoptive parents, Wayne and Kelly, name the identical twins Wyatt and Jonas. While Wayne relishes the day when he can take both his sons hunting, fishing and discuss sports, it becomes apparent early in their lives that Wyatt prefers dressing and acting as a girl. Both Wayne and Kelly come from conservative backgrounds, though Kelly was brought up in an unconventional family unit when her biological mother gave Kelly to her sister to raise. This unconventional upbringing and living on her own by 17 allows Kelly to adapt to Wyatt’s gender non-conforming behavior much better than Wayne. Wayne’s upbringing was small town tight-knit family, and he has equal expectations of behavior from his own family.

The twins spend their early years in Northville, New York, but before they begin first grade, Wayne switches jobs, and the family moves to Orono, Maine. By five years old, Wyatt already prefers to wear girl’s dresses, refers to himself as a boy-girl and tells his father that he hates his penis. At a meet-the-Maineses party in Orono, Wyatt wears his favorite princess dress complete with a wand. His father scolds him because he is afraid what his new neighbors might think seeing one of his sons dressing as a girl. While Wayne prefers to ignore Wyatt’s behavior, Kelly, realizing this is not a phase, is determined to figure out what Wyatt needs. In her search, she comes across the word transgender, and believes this term describes her son. In a joint therapy session, Jonas tells Wyatt he always thought of him as a sister. Despite a supportive family, it is difficult to foster a sense of belonging for Wyatt, especially when joining clubs and teams like Cub Scouts or sports. Wyatt develops tics, like plucking his hair out strand by strand.

At Asa Adams Elementary School, most students accept Wyatt as a boy-girl and his preference for female pronouns. The school counselor, Lisa Erhardt does her best to learn about transgender issues and contacts that would be helpful for Kelly. The Maineses meet with Norman Spack, an endocrinologist whose specialty is with transgender children. The family is relieved to know that a plan exists; Wyatt must wait until puberty for male-hormone suppressing drugs, then female hormones will be administered, followed by sex-reassignment surgery at 18.

When Wyatt enters fifth grade, he changes his name to Nicole, and friends and family adjust. Fifth grade is located in a different section of Asa Adams, and here, instead of single stall bathrooms, multi-stall bathrooms according to gender are used. Nicole uses the girl’s bathroom. This comes to the attention of Paul Melanson, a guardian of another fifth grade student and adversary to the LGBT rights movement. He regularly coaches his grandson to follow Nicole into the girl’s bathroom and call Nicole names. He also speaks publicly against the school’s policy with Nicole. Nicole is temporarily banned form the girl’s bathroom and must use a staff bathroom. In addition, the school assigns a teacher to follow Nicole all day to ensure her safety. Both policies begin to feel restrictive to Nicole and it seems the school is more worried about a lawsuit from Melanson than Nicole’s safety. The Maineses are never consulted about any policy for Nicole, and Kelly’s suggestions and protests are left unheard.

At the end of sixth grade, when it is clear policies at the school will not change, the Maineses move to Portland though Wayne keeps his job in Orono and visits on the weekends. They file a civil suit against the Orono School Department. Through seventh and eighth grade in Portland, the twins are sworn to secrecy concerning Nicole being transgender. Wayne, now exhausted at all the secrecy, openly discusses Nicole in front of the Maine legislature who are set to vote on a bill that would bar transgender people from the bathroom to which they identify. The bill is defeated, perhaps with the help from Wayne and Nicole speaking one-on-one with as many state representatives they could.

At the Maine Supreme Court on January of 2014, the civil suit against the Orono School District is won. After taking the male suppressing hormones and estrogen, Nicole is ready for sex-reassignment surgery at 18. The surgery, performed in July 2015, is a success.

More summaries and resources for teaching or studying Becoming Nicole: The Transformation of an American Family.

Becoming Nicole: The Transformation of an American Family from BookRags. (c)2022 BookRags, Inc. All rights reserved.