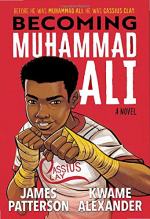 James Patterson and Kwame Alexander
This Study Guide consists of approximately 53 pages of chapter summaries, quotes, character analysis, themes, and more - everything you need to sharpen your knowledge of Becoming Muhammad Ali.

Louisville, Kentucky, was the overall setting of most of the events of this novel. There were specific settings described in this town, which was where Cassius Clay was raised. In keeping with cities of this size, the town was divided into neighborhoods. Cassius and his family lived on the West Side. A bully named Corky lived in Smoketown. There were other neighborhoods, including some that were off limits to Blacks. Cassius and other Blacks went downtown, but store owners often watched them carefully, expecting trouble.

Columbia Boxing Gym was located in the Columbia Auditorium and run by Joe Martin. Cassius, Rudy, and Lucius found the gym by accident. This was the first time Cassius had seen a boxing ring in person and the experience changed his life. He spent a lot of time there in the years after that first visit, and Joe trained...