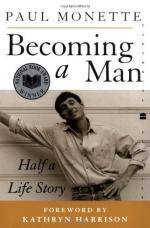 Becoming a Man: Half a Life Story Summary & Study Guide

Paul Monette
This Study Guide consists of approximately 51 pages of chapter summaries, quotes, character analysis, themes, and more - everything you need to sharpen your knowledge of Becoming a Man.

Becoming a Man: Half a Life Story Summary & Study Guide includes comprehensive information and analysis to help you understand the book. This study guide contains the following sections:

This detailed literature summary also contains Topics for Discussion and a Free Quiz on Becoming a Man: Half a Life Story by Paul Monette.

Paul Monette tells the story of his life: growing up gay in a world where he felt gay was seen as just not right. He grows up in Andover, Massachusetts, a primarily Catholic upper-middle class town. His loving parents soon add a younger brother to the family. After witnessing vicious bullies call a quiet nerdy classmate "homo," Paul learns that he must hide his homosexuality at all costs. He throws himself into the role of class clown and charmer, making every attempt to keep attention away from his sexuality. Paul's confusion increases as he begins experimenting sexually with neighborhood boys and his feelings grow. Outside of his sexual encounters, Paul never feels comfortable around boys his own age. Unable to understand their dirty jokes and completely inept when it comes to sports, he just isn't able to fit in with them.

Paul moves on from grade school to an all-boy prep school, where he immediately feels out of place beside boys who are endowed with athletic prowess and muscular statures. He performs well in school, however and moves on to attend Yale University. The male ideal is the same at Yale as it had been in prep school and his two roommates fit the picture of the male athletes Paul had worshipped. The only difference this time is that he is able to befriend these men, desperately seeking their approval. Paul develops a couple of unrequited crushes, which lead him to nothing but further frustration. He finally grows tired of falling in love with men who don't love him back.

Paul heads to Cambridge on a fellowship. He is meant to study Tennyson's letters for his thesis, but he soon grows tired of working and heads off to explore Europe. During this trip, Paul begins work on his novel. He is endlessly proud of it and devotes himself to it even after returning to Yale. Another highlight of his time in college is his induction to a society called Elihu. He develops close friendships with his brothers in the society. He becomes closest friends with one particular member of the society, so close that he plans to come out to him the night after graduation. Paul cannot bring himself to come out in person, so he plans to write his friend a letter. Before Paul can do this, he learns that his friend has died unexpectedly. Paul is devastated.

After college, Paul begins teaching at an all-boy school and immediately becomes popular with his students. One student lures him into a sexual relationship and then reports him for it. Paul is not convicted of any charges, since the child has had problems at schools before, but Paul leaves the school, moving on to a much better one. Paul teaches at Canton for six years and during that time he begins an interior decorating business with a close friend.

Paul begins therapy at the insistence of a friend who is concerned that he looks suicidal. The therapist encourages Paul to try to go straight. Paul begins a series of relationships with women, trying to convince himself he could be straight, but he still longs for men. Eventually, Paul realizes that he is gay and there is no changing this. He has known it all along. Throughout his entire life, Paul has remained petrified of coming out and has not been able to do so, no matter how much he longs to free himself of the pain of the closet. Finally, as the story comes to a close, Paul meets his soul mate, Roger and with his help, is finally able to come out.

More summaries and resources for teaching or studying Becoming a Man: Half a Life Story.

Becoming a Man: Half a Life Story from BookRags. (c)2022 BookRags, Inc. All rights reserved.