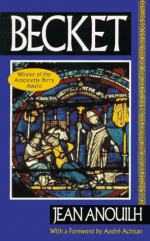 Becket, or the Honor of God Summary & Study Guide

Jean Anouilh
This Study Guide consists of approximately 25 pages of chapter summaries, quotes, character analysis, themes, and more - everything you need to sharpen your knowledge of Becket, or the Honor of God.

Becket, or the Honor of God Summary & Study Guide Description

Becket, or the Honor of God Summary & Study Guide includes comprehensive information and analysis to help you understand the book. This study guide contains the following sections:

This detailed literature summary also contains Topics for Discussion on Becket, or the Honor of God by Jean Anouilh.

Before his appointment as Archbishop of Canterbury, Thomas Becket's loyalties are to the King. He fights as a soldier in the King's wars, and offers advice to the King. He also helps the King arrange for the Church of England to pay some taxes to the throne, which the Church balks at forcefully. Becket, by the end of Act One, reveals his loyalty is an opportunistic loyalty; he is not exactly sure where his honor lies in life. While in the King's employ, he does serve the King well.

Thomas Becket is appointed as the Archbishop of Canterbury in Act Two of the play. The predecessor Archbishop has died and King Henry wishes to control the Church by having his own man in place at the helm of the Church. That man is Thomas Becket. Becket at first is very apprehensive about taking on this role and great responsibility. When he does relent, he embraces the position whole-heartedly. He renounces his riches and former lifestyle. Becket embarks on a journey of discovery about himself and what he must do to further the honor of God. This furthers the main conflict in the play; Becket will defend the honor of God, while the King defends the honor of the realm.

In Act Three, King Henry takes ruthless action against Becket's priests. This is in retaliation against Becket, who excommunicated three of the King's officials. King Henry laments the deterioration of his relationship with Becket. He feels betrayed by Becket's allegiance to God and the Church of England. Becket has a new purpose in life, and at the expense of his past friendship with the King is committed to his goal of defending the honor of God. Both men employ tactics to advance their ideologies.

In Act Four, both men come to a better understanding of each other's position when they have a face-to-face meeting on a vast plain. However, this understanding does not make either one back down from their position. Therefore, the plot reaches its inevitable conclusion; without compromise, there must be a confrontation - one side will win, while the other loses. The King of England, by indirect order, is ultimately responsible for the murder of Thomas Becket. While he mourns for his murdered friend, he also knows he has secured his position as leader of the kingdom.

More summaries and resources for teaching or studying Becket, or the Honor of God.

Becket, or the Honor of God from BookRags. (c)2022 BookRags, Inc. All rights reserved.