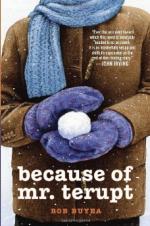 Rob Buyea
This Study Guide consists of approximately 33 pages of chapter summaries, quotes, character analysis, themes, and more - everything you need to sharpen your knowledge of Because of Mr. Terupt.

Because of Mr. Terupt Summary & Study Guide includes comprehensive information and analysis to help you understand the book. This study guide contains the following sections:

This detailed literature summary also contains Quotes and a Free Quiz on Because of Mr. Terupt by Rob Buyea.

Because of Mr. Terupt, by Rob Buyea, is a novel about one year in the life of a fifth grade class at Snow Hill School. Told through the eyes of seven students, the class is deeply affected by their new teacher Mr. Terupt and the tragic accident that touches all their lives.

As the school year opens, the fifth grade class of Snow Hill School in Connecticut meets the new teacher, Mr. Terupt. Their reactions to him vary. Peter, the class cut-up, tries to see what he can get away with and is impressed when Mr. Terupt is cool about correcting his behavior. Jessica, having just moved from California, appreciates the way he relates to her since he is new also, and Anna, who tries to stay in the background, likes the way he subtly draws her into class discussions. Luke is the most studious, so he appreciates the creative class projects Mr. Terupt devises, while the more morose Jeffrey just hopes to be ignored. Alexia is too concerned with manipulating the other girls to pay much attention to the new teacher and Danielle is too worried about being manipulated by Alexia.

Before long, all of the students warm up to Mr. Terupt, who has a way of engaging everyone and making them want to do better. He even gives them a party day as a reward to reaching certain goals and gets Mrs. Williams, the principal, to agree to let the class go outside to play in the snow on their reward day. When a game of roughhousing goes awry, Mr. Terupt is hit with an icy snowball and goes into a coma, having previously sustained a number of concussions as a high school and college wrestler.

The accident has a dramatic impact on all the students, who worry about the role they played. However, it soon becomes obvious that the teacher's influence on them continues even when he is unable to interact with them. Jeffrey, who has long felt guilty because his stem cell and bone marrow donations were unable to save his brother's life, finally reaches out to his grieving parents and tries to put his family together again. Danielle approaches her conservative, religious family in the hope of getting them to accept her friendship with Anna, whose single mother has been ostracized since becoming pregnant as a teenager. Alexia comes to terms with the events that have caused her to lie in order to manipulate and control others and learns to be a true friend, and Peter learns that students with learning disabilities are sometimes more wise than those in the school's "regular" classrooms.

As the school year draws to a close, the students reflect on how they have benefited from Mr. Terupt's influence and are thrilled when he arrives at school on the last day and the principal announces that he will be their teacher again in sixth grade.

More summaries and resources for teaching or studying Because of Mr. Terupt.

Because of Mr. Terupt from BookRags. (c)2022 BookRags, Inc. All rights reserved.