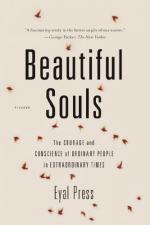 Beautiful Souls: The Courage and Conscience of Ordinary People in Extraordinary Times is a sociological examination by Eyal Press of average people who find themselves in difficult situations, and make important moral choices that set them at odds with people and events around them. Press begins his book by describing how, during the massacre of Jews at the town of Jozefow, Poland, a handful of German troops refused to participate in the bloodshed while everyone else did. Press wonders about what set such men apart from the others. He goes on to explain that his book will be about four such individuals who made moral choices, and that he will examine why such individuals made their choices, and what consequences they had.

Press first presents the case of Paul Gruninger, commander of the state police in the Swiss town of St. Gallen. Gruninger was a family man, a Christian, a military veteran, and a conservative. As a part of the state police, he was required to uphold the laws of Switzerland, including turning away Jewish refugees fleeing from Hitler. Gruninger refused to obey the law, instead granting “special permission” for Jewish refugees who saught him out to stay in Switzerland indefinitely. For his efforts, Gruninger was thrown out of his job, and spent the last 30 years of his life unable to find steady employment, while his family was initially shunned. Gruninger never regreted breaking the law, saying he did what he knew to be right, having personally looked into the eyes of the people he was supposed to send away. Likewise, the world changed and became inconsistent with Gruninger’s own beliefs, so he refused to go along with the world.

Press next presents the case of Aleksander Jevtic, a Serb national caught up in the midst of the Balkan War of 1999 in which Croats and Serbs battled one another over Croatian independence. Jevtic, who lived in the multiethnic city of Vukovar, was rounded up by Serb troops along with many other Croats. Jevtic, who knew the Serb officer in charge, was given the responsibility of separating Serbs from Croats so Serbs were not tortured and killed. Jevtic identified as many Croats as Serbs as he could, saving many lives by doing so. Jevtic explains to Press that he did so because he was raised to love and respect others, but also because he was independent-minded and did not care about belonging to groups or what they thought of him. Jevtic reveals to Press that his wife, Wendy, is a Croat – and that she initially hid him during the early days of the war.

Press then presents the case of Avner Wishnitzer, an Israeli veteran and liberal Zionist who believes the Israeli efforts in Gaza and the West Bank are nothing more than unjust occupation, and so refused orders to serve in those areas after learning of the attempts of some Israelis to run Palestinians off their land. Even when Palestinians launched terrorist attacks in Jerusalem and Tel Aviv in 2003, and even when this caused the loss of liberal support for Palestine, Avner stood his ground and refused to serve in territories he considers to be unjustly occupied. Avner even signed a public letter to his effect, and upon refusing to withdraw his name, was thrown out of the service. Avner explains to Press that in his own case, his personal perspective on things changed, as the nation’s policy remained the same. Avner does not regret his stand, even though it has cost him nearly everything in his life.

Press finally presents the case of Leyla Wydler, an El Salvadorian immigrant to America who, as a single mother, fought and struggled to become a six-figure salaried financial advisor at Stanford Group Company. Leyla quickly began to wonder how investments made into Stanford International Bank were generating constant, high returns, and she felt pressured to sell CDs in the bank. Her coworkers called her crazy for choosing to ask questions rather than just collecting easy paychecks. But believing first in human values and American ideals, Leyla refused to sell CDs until she had straight answers. She was fired. Leyla leaked information about the company to the U.S. Senate, regulatory agencies and organizations, and the papers. Eventually, Stanford was exposed as a Ponzi scheme. Leyla does not regret her choice, and would rather be moral than wealthy.

As Press concludes his book, he explains that he hopes highlighting the moral stands of some will encourage other moral stands to take place, and that those who make moral stands should not always expect glory or praise.