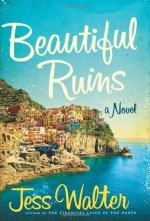 This Study Guide consists of approximately 39 pages of chapter summaries, quotes, character analysis, themes, and more - everything you need to sharpen your knowledge of Beautiful Ruins.

Alvis has been talking about writing a novel about his experiences in World War II since the end of the war. However, for many years it is only talk. When Alvis ends up on Porto Vergogna by accident, he is inspired by a conversation with Carlo Tursi to write the first chapter. For eight years afterward, Alvis returns and continuously tinkers with that one chapter. Finally, Alvis leaves the chapter behind and Dee Moray reads it during her stay in the hotel.

There is a pillbox bunker on the cliff overlooking Porto Vergogna. Inside there are four paintings, one each of two German soldiers and two of the same girl. Dee and Pasquale imagine the girl is the painter’s sweetheart, but the reader learns at the end of the novel that the girl was his sister.

More summaries and resources for teaching or studying Beautiful Ruins.