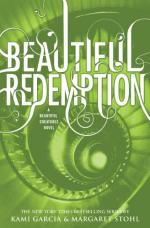 Kami Garcia
This Study Guide consists of approximately 24 pages of chapter summaries, quotes, character analysis, themes, and more - everything you need to sharpen your knowledge of Beautiful Redemption.

Though Ethan Wate has died at the end of the last novel. in Beautiful Redemption he awakes to find himself in his boyhood room with one significant difference. His mother is downstairs. Ethan realizes he is dead, but he enjoys the new found time he has with his mother. His thoughts eventually turn to Lena, and he struggles to find a way to see her. Ethan needs to find a way to communicate with her so that he can let her know he is okay.

When Ethan returns from checking on Lena, he learns from this aunt that his death was a mistake. A man who once worked in the library at the Great Keep tells him how he can change his death and return to the land of the Mortals. Ethan sets out on his mission, but he runs into a snag when the Gatekeeper at the Far Keep refuses to allow him in without a gift. Ethan offers to give him the Book of Moons, hoping this man can keep it from harming anyone else, but he must find a way to get it from Abraham Ravenwood.

Ethan sends a message to Lena asking her to get the book for him. Lena comes up with a dangerous plan. She goes to steal the book from Abraham, but she finds Ridley instead. Ridley agrees to help Lena by setting up a meeting with Abraham at which John agrees to trade himself for the book. Abraham is no longer interested in John, however, and tries to kill him. Macon arrives and kills Hunting, his brother. Abraham is then killed by Link.

Lena takes the Book of Moons to Lila’s grave in hopes that Ethan will be able to get it from there, but it does not work. For this reason, they take the book to Amma and learn that they need magic from both worlds to make it cross over. Amma calls the greats while the Ravenwood family uses magic on their side. The book crosses over with the help of Lena’s ancestor, Genevieve.

Ethan is finally able to enter the Far Keep. He must pass several tests, first making his way in a maze and then fighting Serafine. In a surprise twist, Serafine sacrifices herself in exchange for Ethan’s promise that he will kill Angelus, one of the council members. Ethan then arrives in the Great Keep only to be greeted by the council members and the news that they will not allow him to finish his task. However, the Gatekeeper makes a deal with Angelus that will allow Ethan to try, but giving Angelus the right to stop him.

Ethan and Angelus battle, and Ethan wins. Ethan destroys his page, returning to the Mortal world just in time to watch Amma cross over. Ethan is saddened by Amma’s death, but he is pleased to be back in the Mortal world with his friends and Lena.

More summaries and resources for teaching or studying Beautiful Redemption.