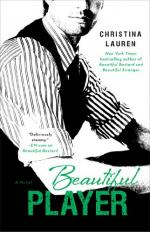 Related Topics
Josh and Hazel's Guide to Not Dating

Christina Lauren
This Study Guide consists of approximately 47 pages of chapter summaries, quotes, character analysis, themes, and more - everything you need to sharpen your knowledge of Beautiful Player.

In Beautiful Player by Christina Lauren, Hanna Bergstrom, age twenty-four, is a driven PhD candidate immersed in biological research until her brother Jensen and her father Johan visit her in New York City. They tell her to cultivate her social life by spending more time with friends and going on dates. Jensen suggests that Hanna call his best friend Will who is thirty-one and also lives in the city.

Hanna realizes she has a healthy sexual curiosity that is going unfulfilled, so she decides to take Jensen’s advice and call Will, an infamous player whom Hanna long ago had a crush on. Will invites her to join him for an early run in Central Park, and both of them are immediately attracted to each other. Hanna asks Will for advice on how to seduce men and enjoy a casual dating life the same as Will has, and Will reluctantly agrees to be her dating coach.

The more time Hanna and Will spend together, the more attracted they become to each other, both physically and emotionally. They have a frank and easy camaraderie. Hanna invites Will to a friend’s housewarming party, where she drags him into an empty bedroom and asks him to guide her through a sexual tryst, as she feels inexperienced. They share a passionate moment, but Hanna assumes Will wants to keep things casual just as he does with his other lovers, Kitty and Kristy, and she accepts a date from a fellow PhD student named Dylan.

Will is very jealous of Hanna’s dates with Dylan. His friends Max, Bennett, Sara, and Chloe tease him about his growing feelings for Hanna. Sara and Chloe spend time with Hanna as well, urging her to be careful with the philandering Will, though she may enjoy the sex with him. Hanna’s relationship with Dylan doesn’t pan out as she finds herself thinking increasingly about Will. The two spend more and more time together, experimenting in every sexual way imaginable, but neither will admit to having feelings for the other. Hanna is adamant that they keep things on a friends-with-benefits level, believing that is all Will is capable of, even after he finally tells her he wants something more stable with her. Will agrees, afraid of scaring Hanna off with talk of something deeper.

Hanna brings Will to her parents’ house for Easter, where Will is forced to face Hanna’s sister Liv, whom he once had a brief fling with. Liv, married and pregnant, has clearly moved on from Will, and only worries that he might hurt her little sister. Will and Hanna hide their true relationship from the family while getting closer to admitting their feelings. Will, who backed off from relationship talk after his first attempt, is simply waiting for Hanna to tell him she doesn’t want to date other men. Hanna is waiting for Will to declare the same about other women.

When they have sex without a condom, they reach a tentative agreement that maybe they will be exclusive, though Hanna still assumes Will has other lovers. She sees a text on Will’s phone from his lover Kitty as they drive back to New York from her parents. Kitty is accepting an offer to see Will during the week. Hanna gets upset. When Will lies about his Tuesday evening plans, Hanna breaks things off with him. Rather than confront Will about Kitty, she tells him that she is young and doesn’t want to be serious.

Both Will and Hanna spend a miserable week apart, thinking only about each other. Will commiserates with Max and Bennett, who have their own dramas: Max just learned Sara is pregnant, and Bennett and Chloe’s wedding is getting out of control. Finally, Will and Hanna are forced to see each other at the half-marathon they signed up to run together. Things between them are awkward and get more so when Kitty shows up and introduces herself to Hanna. Privately, Kitty tells Hanna that Will broke up with her officially because of Hanna and that she hasn’t slept with Will in months.

Hanna realizes she must apologize to Will for the misunderstanding, but she can’t find the words as they run together. Celebrating the completion of the thirteen mile run, Will invites Hanna back to his apartment for lunch. He is still attracted to her, but he tells her that he can no longer have a casual sexual relationship with her. Hanna follows him into the shower and reveals she wants to be exclusive with him as well. They say that they love each other as they make love again. The novel ends two months later as they fly to the West Coast for Bennett and Chloe’s wedding. Will confesses to Hanna that he plans to propose to her, an idea that thrills Hanna, who is confident that she has reformed Will’s player tendencies.

More summaries and resources for teaching or studying Beautiful Player.