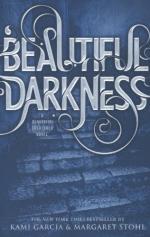 Kami Garcia
This Study Guide consists of approximately 27 pages of chapter summaries, quotes, character analysis, themes, and more - everything you need to sharpen your knowledge of Beautiful Darkness.

Beautiful Darkness is the second novel in the Caster Chronicles by Kami Garcia and Margaret Stohl. In this novel, Ethan Wate and Lena Duchannes are recovering from the battle with Lena’s mother in the previous novel. As things seem to be settling down, Lena begins to act strangely. Ethan is shocked to find Lena hanging out with a new guy, John Breed, and acting like her cousin, Ridley. As Ethan tries to find a way to explain Lena’s behavior, he begins learning more about himself and his mother, things that are difficult to understand. In the end, however, Ethan discovers that sometimes fate knows what it’s doing. Beautiful Darkness is an exciting continuation in a series that will keep fans entertained for years to come.

Ethan Wate attends Macon Ravenwood’s funeral, spending much of the service trying to bolster his girlfriend, Lena Duchannes’, spirits. Lena has taken her uncle’s death very hard and Ethan is concerned that she has fallen into a depression she will not be able to shake. For weeks she refuses to leave the house and when she does, it is only for brief periods. However, things seem to be improving when Lena’s Grandma makes her return to school.

Ethan and Lena go to the lake on the final day of school. They play and Lena seems like her old self. However, when they begin to make out, Lena accidentally hurts Ethan. This frightens Lena and she runs away, jumping onto the back of a strange boy’s motorcycle as she flees Ethan. Ethan knows that Lena is only frightened that when she finally has her Claiming, she will turn evil. For this reason, he tries to seek her out and make things better.

Lena continues pushing Ethan away. One day, Lena sees Ethan having a meal with a new girl in town, Liv. Lena becomes very upset and they argue the next time they meet. Soon after, Lena joins in with the new boy in town, John Breed, and her cousin, Ridley, in pulling a magical practical joke at the county fair. Ethan becomes convinced that Ridley, a succubus, is using her powers to control Lena. However, when he, Liv, and Link track Lena down to a caster bar, he discovers that the choice is all her own.

Ethan and Lena continue arguing and things seem bleak between them. Then, when Ethan learns that Lena is going to go somewhere called the Great Barrier, he knows she is walking into trouble. For this reason, Ethan takes Link and Liv and goes after her. No one believes the Great Barrier actually exists, but Ethan’s instincts take him to his Aunt Caroline’s house where he discovers John and Lena were there looking for something. Ethan finds the journal and realizes that there is something in it that will show them where the Great Barrier is.

Ethan, Link, and Liv begin their journey. It is rough at first because they become lost, unable to count on either Ethan’s instincts or the Arclight his mother has told him is of great importance. Fortunately, they run into Ethan’s Aunt Prue who gives them maps of the caster tunnels. They follow these maps for days, running into Ridley at one point. Ridley insists that Lena’s is in trouble. Ridley has betrayed Serafine, Lena’s mother, in helping Ethan. For this, Serafine takes Ridley’s powers.

When Ethan and his friends finally find the Great Barrier, Ethan finally realizes what his mother was trying to tell him about Macon and the Arclight. Ethan’s mother, Lila, imprisoned Macon in the Arclight to save him from death. Ethan and Liv release Macon just in time for him to help them rescue Lena. When they do rescue Lena, Ethan encourages her to claim herself to stop Serafine from harnessing the power of the Claiming moon.

When the battle is over, Ethan and Lena find their way back to one another. Link is bitten and will soon become a Blood Incubus, but Macon is teaching him how to deal with it. Macon must hide in the tunnels since the world believes he is dead, but Liv has agreed to work with him. Ridley is unhappy about the loss of her powers. For this reason, she decides to trap John Breed in the Arclight.

More summaries and resources for teaching or studying Beautiful Darkness.