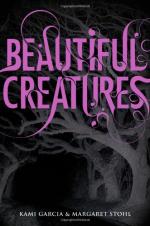 Plot Summary
+Chapters Summary and Analysis
Before: The Middle of Nowhere: Dream On; New Girl; Hole in the Sky; and Collision
Broken Glass; Greenbrier; and The Sisters
The Real Boo Radley; A Fork in the Road; The Last Three Rows; and Gathering Days
A Crack in the Plaster; The Greats: and Red Sweater
Marian the Librarian; Hallow E'en; The Writing on the Wall
Just Your Average American Holiday; Domus Lunae Libri; It Rhymes with Witch; Lost and Found
Grave Digging; Waist Deep; Melting; When the Saints Go Marching In
White Christmas; Promise; The Sandman or Something Like Him; The Battle of Honey Hill
Sweet Sixteen; Lollipop Girl
Family Reunion; The Claiming; Silver Lining
Free Quiz
Characters
Objects/Places
Themes
Style
Quotes
Topics for Discussion
Order our Beautiful Creatures Study Guide

Kami Garcia and Margaret Stohl
This Study Guide consists of approximately 38 pages of chapter summaries, quotes, character analysis, themes, and more - everything you need to sharpen your knowledge of Beautiful Creatures.

This detailed literature summary also contains Topics for Discussion and a Free Quiz on Beautiful Creatures by Kami Garcia and Margaret Stohl.

Ethan Wate is a teenager who lives in the small town of Gatlin, South Carolina, with his father and their housekeeper Amma, who is also Ethan's primary caregiver. Ethan's mother died not too long ago and he and his father are still struggling. Amma is a Seer and charms around the house are a part of Ethan's life that he seldom dares question because Amma is so serious about them. Ethan has been dreaming of a girl. In the dream, he's trying to save her but she slips away from him.

Ethan arrives for another day at school with his best friend, Wesley Lincoln, known as Link. Link announces there is a new student. Her name is Lena and she's the niece of an eccentric recluse, Macon Ravenwood. When Ethan sees Lena, he recognizes her as the girl from his dreams. Lena is not accepted by the other girls who have a very tight clique and refuse to admit outsiders.

It's soon evident that Lena has also been dreaming of Ethan and she initially resists his overtures of friendship. After awhile, she gives in and they begin spending a great deal of time together. They are both falling in love and their connection is so strong that they can communicate telepathically, even when they are miles apart.

Lena reveals that she's a Caster and that all the members of her family are as well. Ethan isn't really surprised, having known there was something unusual going on from the beginning. He accepts that aspect of her life. Then Lena reveals that she'll be "Claimed" on her sixteenth birthday, just a few weeks away, and that she has no choice in whether she'll become Light or Dark. Ethan refuses to accept that and begins working on a way around it. Lena's family and Amma are against their relationship initially but then Lena's family discovers that Lena and Ethan are so strong together that they can face down Lena's mother, a Dark force that threatens Lena's very life.

On the night of the Claiming, Lena learns she actually has a choice in her Claiming but that choice carries consequences. If she chooses Dark, the Light members of her family will die and Lena will become a different person entirely, without the capability to love anyone, including Ethan. If she chooses Light, the Dark members of her family - including her Uncle Macon who she loves dearly - will die. She then learns that she and Ethan will never be able to have a physical relationship even if she's Light. Lena's is upset that she hasn't had time to think through the situation armed with the full knowledge and she blocks out the moon - a vital part in the Claiming ceremony. Meanwhile, Ethan is stabbed and killed. Lena calls on the Casting power to save Ethan but she inadvertently sacrifices Macon's life in return for Ethan's. It seems Lena has avoided the Claiming altogether but Ethan learns the next day that's not the case.

More summaries and resources for teaching or studying Beautiful Creatures.