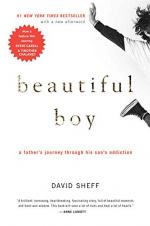 David Sheff
This Study Guide consists of approximately 36 pages of chapter summaries, quotes, character analysis, themes, and more - everything you need to sharpen your knowledge of Beautiful Boy.

This book is a memoir written by writer and journalist David Sheff. It chronicles his experience as parent whose child became addicted to methamphetamine. The book begins with a brief introduction in which David writes about the emotional hardships of having to see his sons struggle with addiction. The book then proceeds in a chronological fashion, beginning from Nic’s birth. Nic was born in 1982. David and his wife Vicki were living in Berkeley, California. A few years after Nic’s birth, David and Vicki divorced and decided to share custody, with Nic traveling back and forth between David and Vicki’s homes. David was a generally healthy and enthusiastic young boy, but the divorce and this custody arrangement may have caused some emotional strain for Nic.

David eventually remarried. With his second wife, Karen, David had two more children: Jasper and Daisy. Nic developed a close relationship with both of his half-siblings. Around the age of 12, Nic began to smoke cannabis, and this worried David. David forbade Nic from smoking cannabis, but Nic secretly continued his drug use. Nic’s drug abuse grew slowly but steadily worse through high school. At age 18, Nic became addicted to methamphetamine. After enrolling in college, he dropped out, and Nic eventually admitted his meth use to David. However, Nic was in denial about the fact that he was an addict. David brought Nic to a rehab facility, where Nic stayed for one month. However, at the end of the program, he suddenly disappeared for a few days. Nic returned days later, and he had relapsed.

David admitted Nic to another rehab program, which counseled family members of addicts a well as addicts themselves. Through this counseling, David became more educated about the specific ways in which addiction can affect the addict and also the addict’s loved ones. David learned about how addiction is a disease that overrides the addict’s personality and self-control. After becoming sober again, Nic reenrolled in college, but he soon relapsed again. Nic disappeared again and continued to use meth. He contacted his family only on brief, sporadic occasions. One day, Nic was rushed to a hospital after overdosing and was admitted to another rehab facility. However, Nic soon left the facility and disappeared again. Eventually, at David’s urging. Nic returned to rehab. David suffered a sudden cerebral hemorrhage one day but was rushed to a hospital and survived.

After completing rehab again, David remained sober for 18 months. However, he eventually had another relapse. Nic began stealing from David and Vicki’s homes in order to help feed his addiction. One day, Vicki found him in her home and threatened to call the police if Nic did not go to rehab. Nic agreed, and after completing an extended program at a different rehab facility, he managed to maintain consistent sobriety. Meanwhile, David, Karen, Jasper, and Daisy began attending therapy to treat the emotional trauma that they suffered as a result of Nic’s addiction. David eventually accepted the fact that his power to help Nic is necessarily limited, and David managed to let go of much of the unproductive anxiety that he had maintained over the years regarding Nic.

More summaries and resources for teaching or studying Beautiful Boy.