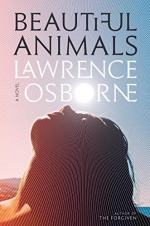 Related Topics
The Ballad of a Small Player
The Glass Kingdom

On the Greek island of Hydra, during what seems to be an unusually hot summer, mid-twenties Naomi (British, a recently fired lawyer) and early-twenties Samantha (Sam, American, a student) develop an intense holiday friendship that, at times, has sexual undercurrents. Naomi has a difficult time with her wealthy businessman father (Jimmie) and her controlling Greek stepmother (Phaine), but is friends with the family’s servant, Carissa. For her part, however, Carissa deeply resents the family’s wealth, partly because of how it leads them to treat her dismissively and partly because of her socialist principles. In Samantha’s case, she gets along well with her family, but nevertheless feels restless in their company.

As the friendship between Naomi and Sam deepens, their journeys around the island lead them to an encounter with a young man who seems to be a refugee, and whose name they later discover is Faoud. As sexual tension simmers between the trio, Naomi takes him on as something of a cause, wanting to show how she is defined more by compassion for those less fortunate than by her wealth. Sam reluctantly goes along for the ride, but tries to distance herself from the situation when Naomi’s plan to get Faoud some money and get him away from the island results in the deaths of Jimmie and Phaine.

In the aftermath of those deaths, Faoud goes on the run (mostly according to the plan laid out for him by Naomi) while Naomi, Sam, and Carissa bury the bodies of Phaine and Jimmie and try to keep their deaths a secret. As Faoud makes his way across Greece to Italy, driving Jimmie’s car and spending money that Naomi had procured for him, Naomi and Sam take some time apart to calm themselves and gain some distance from the killings. Meanwhile, Carissa blackmails Naomi into giving her a substantial amount of money to stay quiet, and to leave.

Shortly after Jimmie’s apparent disappearance, a mysterious colleague (Rockhold) arrives, and attempts to find out what happened to him. His conversation with Naomi arouses his suspicions, and he soon finds out about her relationship with Faoud. Rockhold leaves the island in pursuit, and finds himself able to track Faoud across Italy as a result of Faoud using Jimmie’s credit cards. Meanwhile, Sam develops a relationship with a young American named Toby, also visiting Hydra. Naomi makes arrangements to pay off Carissa and to claim the Hydra house as her own: she tells Sam that the bodies of Jimmie and Phaine buried in the garden make it too risky to sell.

Eventually, Rockhold catches up with Faoud, and a confrontation (that also comes to involve Italian law enforcement) results in them both being killed. At Rockhold’s funeral, Naomi learns from Jimmie’s brother that she is to inherit his estate, and that she is now a wealthy woman. When she returns to Hydra, she and Sam have a conversation in which they both realize they have to go their separate ways, and will likely never see each other again.

As Naomi settles permanently into the house on Hydra, Sam settles into a new life with Toby. At one point, she imagines she is being followed by Faoud, and wonders if he really is, in fact, dead. Meanwhile, the inhabitants of Hydra gossip about both Jimmie and the increasingly eccentric Naomi, narration commenting that as a result of her encounters with people who are familiar only within limited circumstances, she wonders how possible it is to ever really know anyone. There, the novel ends.