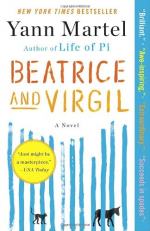 Yann Martel
This Study Guide consists of approximately 54 pages of chapter summaries, quotes, character analysis, themes, and more - everything you need to sharpen your knowledge of Beatrice and Virgil.

This detailed literature summary also contains Quotes and a Free Quiz on Beatrice and Virgil by Yann Martel.

The following version of the book was used to create this study guide: Beatrice and Virgil, by Yann Martel. Alfred A Knopf, Canada, 2010: Random House Publishing Group, New York, 2010.

The narrative unfolds without chapter breaks, but with integrated scenes, written in theatrical format, from a stage story written by one of the characters – in other words, a play within the novel.

The novel begins with a description of how protagonist Henry, a novelist whose most recent book was a world-wide success, had his next project rejected by those who would have published and sold it. This rejection sent him into an experience of writer’s block and a decision to start a different life. He and his wife Sarah moved to a large city and adopted a dog and a cat. While Sarah obtained full time work, Henry became involved with a number of non-writing activities, such as music lessons, a part-time job in a café, and participating in an amateur theatre group. At the same time, he continued to respond to fan mail sent in response to his best-seller, with one letter in particular proving particularly interesting. He discovered that the sender lives in the same city, tracked him down, and was surprised and intrigued to learn that the man was a taxidermist; that they share the same first name; and that that they also share an interest in writing about animals, albeit with human characteristics and experiences.

As the main narrative line kicks in, and as the relationship between Henry and the taxidermist develops (hence the movement of this plot summary into the present tense), Henry becomes both intrigued and disturbed by the subject matter of the taxidermist’s writing project: a play about a donkey and a howler monkey, Beatrice and Virgil respectively, and their struggle to come to terms with a series of horrific, torturous experiences through which they have both lived.

The taxidermist, who has asked for Henry’s help in writing the play, proves to be difficult to work with, revealing little about himself and his project but giving Henry just enough information to eventually conclude that the taxidermist is writing a story inspired, at least in part, by the Holocaust. Henry finds himself increasingly intrigued by the taxidermist’s approach and perspective, which have some similarity to his own, as Henry also has an interest in drawing upon the Holocaust for inspiration to explore and write fictional, imaginative work. Meanwhile, Henry’s non-writing life goes on: his music lessons continue, his work in the café continues to be pleasant, and his roles in the theatre company become more significant. Sarah also becomes pregnant.

As he recovers from his injuries, Henry struggles to recall and recreate the taxidermist’s play. As part of that process, he does what the taxidermist had asked him to do: develop and complete a particular scene, with narration commenting that the work was the first piece of fiction he had written since having his book rejected, the novel concludes with a representation of the scene written by Henry.

More summaries and resources for teaching or studying Beatrice and Virgil.