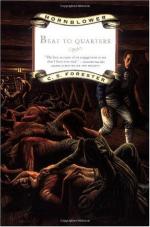 C. S. Forester
This Study Guide consists of approximately 48 pages of chapter summaries, quotes, character analysis, themes, and more - everything you need to sharpen your knowledge of Beat to Quarters.

This detailed literature summary also contains Topics for Discussion and a Free Quiz on Beat to Quarters by C. S. Forester.

Captain Hornblower commands H.M.S. Lydia, a 36-gun frigate on detached service. He is ordered to proceed to the Pacific Coast of Nicaragua, deliver armaments to a local revolutionary and assist the revolutionary in fomenting rebelling in Central America, destroy Natividad, a Spanish 50-gun ship, assist in the establishment of a trans-isthmus trade route, and if possible, establish British trade in the area.

The novel opens as Lydia closes the west coast of Nicaragua, making a perfect landfall at the Gulf of Fonseca. Lydia anchors and is shortly hailed by a small craft from a seemingly deserted beach. Hornblower accompanies a local envoy to meet the appointed revolutionary contact. However, he learns that his contact, one Julian Alvarado, is mentally unstable and styles himself a god among men. Although Julian Alvarado—El Supremo—is obviously deranged he is nevertheless fomenting rebellion against Spain, England's military enemy, and thus Hornblower delivers the armaments and proceeds to execute his other orders. Shortly thereafter Natividad is sighted making for the Gulf of Fonseca. Hornblower hides Lydia behind an island and executes a perfect surprise attack that captures Natividad without the loss of a single Englishman. El Supremo demands Natividad be surrendered to his command, and again Hornblower complies.

Lydia and Natividad transport El Supremo and five hundred soldiers along the coast to La Libertad where a land action quickly captures the town. El Supremo then leads his army overland where they capture San Salvador. Hornblower proceeds along the coast alone, seeking to make prizes and cause ruin. A small Spanish lugger flying a flag of truce shortly joins him—the lugger delivers the startling news that Spain has split with France and allied with England. Hornblower's new orders include a repeal of his previous orders and instruct him to now assist the Spanish government in Central America in any way possible. He determines to recapture or destroy Natividad and begins to patrol the coast. His command is greatly complicated when Lady Barbara Wellesley, a young but influential aristocratic woman demanding transportation to England, joins the ship.

Within a few days, Lydia raises Natividad and chases her. The much-smaller English frigate overtakes the Spanish ship-of-the-line and fierce and close gun battle ensues. Lydia strikes first and hard and uses her superior maneuverability to great advantage, but the Spanish ship's more numerous and heavier guns are telling and Lydia is dismasted. The engagement continues until the Spanish ship also is disabled and the two stricken vessels drift apart as night falls. Heroic efforts during the night see Lydia ready for limited action in the morning. Hornblower has correctly determined the Spanish captain's course and as dawn breaks the two ships again join in combat although the wind dies to a dead calm. Lydia survives withering long-range fire from the Spanish ship as Hornblower causes his frigate to be towed into action by the ship's boats. After numerous broadsides, the wind picks up and Lydia's superior handling proves decisive. Although both ships are devastated Lydia emerges victorious and repeatedly rakes the Spanish ship. As fires break out aboard the Spanish ship Hornblower demands surrender but the Spanish captain—a disciple of El Supremo—refuses and Natividad sinks with nearly all hands lost.

Hornblower returns to Panama to report his victory but is greeted with formal rebuke and polite insults. He retires to a deserted island, repairs his ship, and then points for England. During the ensuing months of relative inactivity, Hornblower and Wellesley develop a close and then intimate friendship. Wellesley develops romantic feelings for Hornblower. The reserved and proper captain entertains thoughts of a dalliance with the influential and rich young woman but realizes his social station and economic situation would ensure a disastrous personal outcome to any romantic relationship. Instead, he determines to focus on Maria, his distant wife in England, and remain at arms' length from Wellesley. As Lydia approaches St. Helena and a small English fleet Wellesley and Hornblower find themselves shut into the small captain's cabin and collapse to the deck kissing in a passionate embrace. Hornblower regains his composure, however, and breaks off the embrace and declines to pursue the relationship. Snubbed, Wellesley turns icy and departs from the ship as quickly as possible.

More summaries and resources for teaching or studying Beat to Quarters.