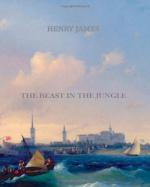 The Beast in the Jungle Themes

"The Beast in the Jungle" is a story about a man who believes in fate, most particularly his own: "It isn't a matter as to which I can choose, I can decide for a change. It isn't one as to which there can be a change. It's in the lap of the gods. One's in the hands of one's law—there one is." Arguably, due to Marcher's fate turning out to be the opposite of what he expects, James could be said to be mocking the pretensions of his protagonist. Is his conviction about the "specialness" of his fate the flaw of an egotist? Or, is he a tragic figure who invents a grand fate due to his passion for a life which his circumstances cannot avail him?

John Marcher believes he fails on two counts. On the one hand, he decides near the...