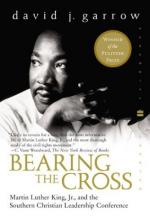 David Garrow
This Study Guide consists of approximately 80 pages of chapter summaries, quotes, character analysis, themes, and more - everything you need to sharpen your knowledge of Bearing the Cross.

This detailed literature summary also contains Topics for Discussion and a Free Quiz on Bearing the Cross by David Garrow.

Bearing the Cross is a Pulitzer Prize winning book about Martin Luther King Jr. and his participation in the civil rights movement of the 1950s and 60s . The author, David J. Garrow, is a well-respected educator and historian who does not just report on the facts of history, but has interviewed hundreds of King's friends and enemies in order to bring the readers a complete picture of the man, his struggle, and his legacy. Bearing the Cross is a recounting of history that is well worth a second look by every American.

Rosa Parks was a tired tailor's assistant on her way home from work when she unwittingly became a pawn of history. Mrs. Parks was asked to give her bus seat up so that a white passenger would not be forced to ride the bus seated across from her. Mrs. Parks refused. This refusal sparked a bus boycott that would not only force the integration of Montgomery's buses, but would create a legend in American history.

Martin Luther King, Jr. had only a few months before accepted his first role, serving as pastor of the Dexter Baptist Church in Montgomery, Alabama. A man called King, and asked to use his church for a meeting about a possible bus boycott. King hesitated to become involved. However, in a short amount of time, King would be made president of a new organization created for the sole purpose of running the bus boycott. King was not the only leader involved in the boycott, but it was King's name that made the newspapers, and it was King who people remembered when the boycott ended successfully.

Inspired by the success of the Montgomery Bus Boycott, King decided there needed to be a new organization, one with a membership of black Christian leaders, which could pick another area of segregation to attack and change like they had in Montgomery. An invitation to southern leaders went out and the succeeding conference culminated in the creation of the Southern Christian Leadership Conference (SCLC), an organization designed to promote integration throughout the south. Shortly after the SCLC's creation, a group of college students began a protest of their own at lunch counters throughout the south. An organization sprang from this group of college protestors, the Student Nonviolent Coordinating Committee (SNCC), which would welcome King and the SCLC as advisors in their future works. The SNCC was eager for change, and immediately jumped at the suggestion of testing the interstate travel laws that said that all bus terminals should offer integrated waiting rooms and lunch counters to interstate travelers.

The ensuing bus rides, called the Freedom Rides, were without incident until they reached the south. Outside Anniston, Alabama, one of the buses was attacked by a mob and firebombed while its sister bus was boarded by an angry mob and its passengers beaten. The Freedom Riders refused to give up and continued their journey. The Attorney General was forced to intervene on behalf of the riders, but a mob still attacked the passengers and severely beat many of them. However, the rides continued. New riders continued to join the fight, picking up the journey each time another team was beaten or scared off by mobs of angry whites. The rides continued until it became clear that change would not be achieved through this method.

Not long after the last of the Freedom Rides ended, the SNCC and the SCLC turned their attention to voter registration. During this period, several SNCC representatives found themselves in Albany, Georgia, where local activists had been trying for years to achieve change in segregation and the blatantly unfair treatment of blacks. The SNCC representatives began organizing students in protests to test many different facets of segregation in this small town. The protests grew larger and larger until an organization was formed of multiple civil rights organization leaders to govern them. Before long, King was asked to come join the demonstrations that had already resulted in the arrests of hundreds. Despite the fact that some leaders resented his presence, King arrived in Albany with the hope of bringing national attention to the struggles in that small town. King was arrested during a protest march, garnering the desired affect, and creating a situation in which the Kennedy Administration was forced to send a mediator to encourage a settlement between white city leaders and the black leaders.

Due to the fact that the Albany settlement did not include all the desired demands and did not affectively change segregation in the city, it was looked upon as a failure. King and his fellow leaders took a long hard look at their actions in Albany, picked out the mistakes, and took what they had learned into future demonstrations. A short time later, King and his fellow leaders turned their attentions on Birmingham. King carefully orchestrated a group of protests that were designed to force the city into segregating their businesses and public buildings and allow equal opportunity employment for blacks. King began small by boycotting downtown stores and staging sit-ins at local lunch counters. Later, peace marches began in the streets of Birmingham, pushing the local Public Safety Commissioner into showing his hand by bringing out attack dogs and using fire hoses on the protestors. The pictures that filled the papers after these marches horrified the country, and Birmingham was soon forced into negotiations. Despite minor mistakes made during this time, King considered Birmingham a success.

Flying on the excitement of a win in Birmingham, King decided it was time to pressure the President into creating a federal mandate that would end segregation throughout the nation. King could not get a meeting with the President, so he began to plan a march on Washington that was designed to scare the President into taking a stand on civil rights. However, during the planning of the march, the President came out publicly in favor of civil rights. King turned the momentum of the march from the President to Congress, which at that time was considering a Civil Rights Bill that was not expected to pass. The March on Washington was an overwhelming success, and King made the speech of a lifetime.

After Washington, however, the enthusiasm of the movement began to wane due to a lack of obvious hotspots. Diane Bevel, an activist married to SCLC member James Bevel, suggested massive demonstrations across Alabama under one program that would be called the Alabama Program. The Alabama Program organized protests in places such as Birmingham, and supported voter registration drives. During this time, King was also informed of tensions developing in the Florida town of St. Augustine. St. Augustine was about to celebrate its quadri-centennial, and local black activists were outraged that the town had asked for federal money to support this celebration when it openly supported segregation. The black activists asked the SCLC to come in and support protest marches in their town. King agreed.

Protest marches began in St. Augustine, but were marred by violence from the local Ku Klux Klan (KKK). Negotiations were unsuccessful due to pressure from the KKK on local businessmen, but when the Civil Rights Act of 1964 was enacted, it gave the businessmen the support they needed to integrate their businesses. Shortly after this success, King returned to Atlanta where he learned he had won the Nobel Peace Prize. This was a great honor for King, and a boost for the movement.

Upon returning to the States after accepting his award, King was informed about tensions in Selma, Alabama. Most cities in Alabama had conformed to the new statues under the Civil Rights Act of 1964, except for Selma. King went to Selma to lend his support to the cause shortly after a march that ended in terrible violence by the local police. King led two more marches that ended in a successful negotiation with town officials. However, the success was marred by the killing of a movement activist by members of the KKK. This murder had great influence on Congress as they debated a voting rights bill, which would pass in the months following the Selma incident.

At this point, King felt that the attentions of the SCLC and the movement should turn to the north. King visited many different northern cities, finally setting his sights on Chicago. Chicago had dealt with terrible segregation within their schools for many years, and was at a point where demonstrations seemed to be the only option left for the black activists. King sent members of the SCLC to investigate the situation and to come up with a plan. James Bevel, a member of the SCLC, convinced King that the focus of the SCLC's attention should not be on school segregation, but instead on the poor living conditions of Chicago blacks. King agreed. However, before a plan could be cemented, James Meredith, the first black man to register at the University of Mississippi, was shot while on a walk across Mississippi to encourage blacks to vote in an upcoming primary.

King and other activists decided to finish Meredith's walk for him. However, tensions between leaders marred the marches. One angry leader made a speech that included the phrase "black power", a phrase that quickly caught on. King was concerned about this phrase because of its implications of black separation, and was afraid it would fuel hate and violence. However, King refused to make a stand against the phrase. Back in Chicago, the unfocused fight against the slums became more focused as the leaders began marches against local real estate firms that openly discriminated against blacks. However, the white reacted with violence, causing the city to be anxious to enter into negotiations in order to end the protests completely. These negotiations were nearly destroyed by an injunction initiated by the Chicago mayor, but an agreement eventually was reached.

King then turned his attention to what he called the second phase of the civil rights movement, economic injustices. King wanted the government to take responsibility for the poor conditions in which many Americans lived. This fight included King making a stand against the war in Vietnam for many reasons, including the fact that the Johnson Administration was taking money from social programs to fund the war. King's stand on the war and his shift in the focus of the movement brought him criticism from other civil rights leaders, the government, and his own SCLC associates, but he refused to back down. King began planning a march on Washington that he hoped would end in legislative changes for the poor. While planning this march, King went to Memphis where protests were underway after a strike of black sanitation workers had led to tensions between the black community and the city officials. King participated in one march that ended in violence, and was in town to lead another when he was shot outside his hotel room.

More summaries and resources for teaching or studying Bearing the Cross.