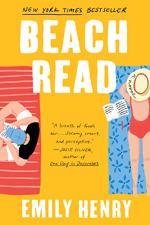 Emily Henry
This Study Guide consists of approximately 72 pages of chapter summaries, quotes, character analysis, themes, and more - everything you need to sharpen your knowledge of Beach Read.

The cottage that January inherited from her father is in North Bear Shores, Michigan. The majority of the narrative takes place here. The setting symbolizes January's entry into her new world as she starts her coming of age journey.

The cottage is where January goes to live after her father's death and her break-up with Jacques. The setting is significant because it is the place where she shows her vulnerabilities. She delays going into certain rooms because she fears facing the truth about her father's relationship with Sonya. At the same time, the cottage is where she finds the truth that allows her to make peace with the past and move forward in life. It is also where she succeeds in writing her novel. She first meets Gus again as she is his neighbor at the cottage.

More summaries and resources for teaching or studying Beach Read.