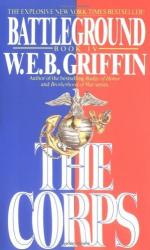 W. E. B. Griffin
This Study Guide consists of approximately 42 pages of chapter summaries, quotes, character analysis, themes, and more - everything you need to sharpen your knowledge of Battleground.

This detailed literature summary also contains Topics for Discussion and a Free Quiz on Battleground by W. E. B. Griffin.

Battleground, by W. E. B. Griffin, is the fourth novel in a series called The Corps, referring to the Marine Corps of the United States of America. This novel concentrates on the actions of several fictional characters as they are brought together in the South Pacific battleground of World War II from June to August of 1942. The main character is Captain Fleming Pickering, who holds a unique status in the Navy during this war, having been a Marine in WWI. Secretary of the Navy Frank Knox has assigned Pickering the job of gathering the truth about what is happening in the war so he can compare that to the reports from the field he is receiving from his admirals.

This novel of the series concerns the sequence of events for each character covering the short months between the Midway Island fight and the battleground of Guadalcanal, showing the disparity between the American and Japanese forces, the struggles of individuals in these situations, the loyalty of men to their country, and their personal loves and lives.

In June of 1942, Bill Dunn, a Marine naval aviator, is in the battle over Midway, and is later questioned about his actions, with the inference he may have behaved incorrectly. While in the hospital he begins an affair with a nurse named Mary Agnes. Pickering is in Australia, a close friend and confidant of McArthur. Pickering is receiving clandestine messages from his secretary and other contacts he has begun to gather around him, including Pluto Hon, a brilliant cryptologist. Marine Intelligence back in DC is responsible for assisting Pickering with formation of Special Detachment 14, which is in support of the Coastwatchers Establishment. Coastwatchers are men who were left on some of the South Pacific islands to watch the skies and the seas for Japanese movement.

John Moore is a young man in Officers Candidate School who has no idea his world is about to be turned upside down. At the demand of Marine Intelligence, he is pulled out of school, given the rank of Sergeant, and provided with orders to proceed to Australia after a short visit home to Philadelphia. Moore is not told of his ultimate assignment and is required to just trust the men in command. While on his short leave to his home, he meets and falls in love with an older woman named Barbara. Also, Moore learns that his father has been using money from Moore's trust fund. As Moore continues his journey, he thinks of making a life with Barbara. Meanwhile, Barbara is realizing she is foolish to plan a life with a younger man, and when her husband comes to her asking for a reconciliation, she accepts his offer.

A special fighter group named VVF-229 is being formed under the command of Col. Dawkins, on Oahu. This group will be critical for the defense of Guadalcanal, but at the moment only has one member, Bill Dunn. Captain Charles Galloway is en route to Marine Headquarters in Hawaiia to be the leader of the group, and he is traveling with his girlfriend, Caroline. The two are very much in love. When Galloway arrives, he enlists the assistance of his old friend Steve Oblensky, who is a miracle worker with all types of motors, and the men begin test flying the aircraft and repairing the motors while they are waiting for the rest of their fighter group to arrive.

Meanwhile, Moore joins Pickering's team in Australia. Although he was originally conscripted to work with the Coastwatchers, Moore is considered more appropriate for Hon's cryptology efforts. Moore speaks Japanese fluently, and more importantly, lived in Japan long enough to absorb the culture. The other member of Pickering's elite team is Sgt. Banning, a Marine.

VMF-229 gets additional members: Jim Ward (Caroline's brother) and David Schneider. These two aviators are very opposite in character, with Jim being easygoing and friendly, and David being a by-the-book man with no humor. Dunn has tired of Mary Agnes, so when she shows interest in Schneider, Dunn encourages her to move on.

As these teams come into play on this battleground of the South Pacific, there is much concern about the petty rivalries between the USA armed forces, especially between the Marines and the Navy. This war has a much bigger emphasis on the role of aviators, but the Navy is resisting loss of any of its power. It is easy to see how the role of Pickering will play a major factor in pulling together the decision makers to win the war.

Major Jake Dillon, a longtime friend and contact of Captain Pickering, is being sent to Guadalcanal to make a documentary and promotional film for the Marines. Major Dillon also serves as a courier for some of Pickering's team and has strong network of contacts himself.

As the forces come together and the Japanese forces are headed to Guadalcanal to take it back from the Marines, Pickering decides to place himself in the heat of the battle so he can best report back to Knox. While there, Pickering is suddenly placed in command of the intelligence gathering for the forces there. Almost as soon as Knox hears of this, he demands a Navy ship get Pickering out of there. Pickering boards the USS Gregory, which is soon strafed by the enemy, and Pickering must command the ship when her captain is killed in the battle.

VMF-229 is ready to be sent out, and soon all eighteen pilots are placed in the path of the oncoming Japanese airplanes. Dunn emerges with enough kills to rate Ace status, but his achievement is overshadowed by the loss of Galloway, whose aircraft was seen to enter the ocean after being hit.

Before anyone can truly mourn Galloway, word comes that he has been picked up by a PT-109 and is coming back to take over VMF-229.