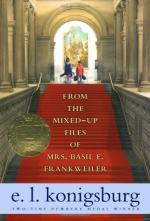 From the Mixed-Up Files of Mrs. Basil E. Frankweiler Setting

The story takes place in Connecticut and New York in the mid-1960s. Tired of her responsibilities, eleven-year-old Claudia Kincaid plans an adventure: she will run away and live in the Metropolitan Museum of Art in New York. Her plans involve her nine-yearold brother, Jamie, who is a pennypincher but also a kindred spirit. Both siblings love adventure, and they complement each other well, Claudia being careful about everything except money, and Jamie being careless about everything except money. Together, these two form a team that first manages to invade the museum and then sets out to discover the secret of Angel, a two-foot statue thought to be the work of Michelangelo. Their efforts to prove that the statue is indeed the work of the famous Renaissance artist lead them to make important discoveries about themselves, about each other, and about what it means to be special.