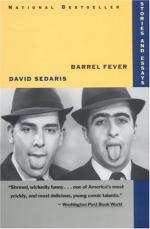 Related Topics
Let's Explore Diabetes With Owls
When You Are Engulfed in Flames
Theft by Finding: Diaries
Calypso
Happy-Go-Lucky

David Sedaris
This Study Guide consists of approximately 27 pages of chapter summaries, quotes, character analysis, themes, and more - everything you need to sharpen your knowledge of Barrel Fever.

David Sedaris is known for being a writer who is not afraid to express his sexual side in his work. Sedaris, openly gay, often creates true to life scenarios in which the characters in the story celebrate their sexuality or are trying to deal with those who are homophobic or violent.

One good example is "My Manuscript," in which Sedaris fantasizes about various people and wonders what it would be like for the men in the fantasies to be put into some unusual sexual situation. The best example is the main character's fantasy about his music teacher, Mr. Chatam. "In my manuscript, Mr. Chatam is kept in an orphanage, completely nude, his head and body shaved bald, until he is adopted by a group of truck-driving studs for use as a sex baby."

In "Glen's Homophobia Newsletter," the main character, Glen, is obsessed with homophobia to the point...

More summaries and resources for teaching or studying Barrel Fever: Stories and Essays.