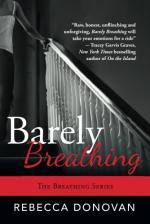 Rebecca Donovan
This Study Guide consists of approximately 44 pages of chapter summaries, quotes, character analysis, themes, and more - everything you need to sharpen your knowledge of Barely Breathing.

“Barely Breathing” is a young adult novel by Rebecca Donovan. It is the second installment of her Breathing Series. “Barely Breathing” focuses on the six months of Emma’s life after she was murdered and resuscitated by her adoptive aunt, Carol. Emma has since been living with her best friend Sara and her family. Rachel, Emma’s mother, convinces Emma to move in with her, and Emma hesitantly accepts, hoping to reconnect with her mother.

The move is disastrous. Rachel is a drunk and a drug addict who also appears to be mentally unbalanced. Rachel’s twenty-four year-old boyfriend Jonathon ends up developing a connection with Emma, who is reluctant to break it because they both understand darkness in life. This complicates things with Evan, Emma’s boyfriend.

After Emma is savagely beaten by her mother’s drug dealer, she decides she has had enough of living with Rachel. However, when Evan and Jonathon fight one another, Emma realizes that she will only ever hurt the good people in her life, and she heads to California for college, forcing Evan to stay East. She tells Jonathon that she never wants to see him again.

More summaries and resources for teaching or studying Barely Breathing.