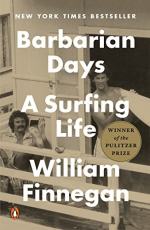 The following version of this book was used to create the guide: Finnegan, William. Barbarian Days: A Surfing Life. Penguin Random House, 2015.

In this memoir, Finnegan describes a lifetime of looking for waves and looking for himself. He divides his memoir into chapters that describe different epochs of his life and his approach to surfing at that time. The book begins in Honolulu in 1966, when Finnegan's family moves to Hawaii for his father's job. Then in eighth grade, the young Finnegan contends with local waves that stoke his obsession with surfing and fends off bullies while developing greater independence from his family. He then describes his ocean-obsessed upbringing in California starting in 1956, when he was four. His parents were TV and film producers and sea-loving liberals who encouraged him to devote himself to socially conscious causes. He then describes being 16 in 1968 in California, when surfers were seen as outcasts and even his friend who played on the football team drops off the team to surf.

Finnegan then details his 1971 stay in Hawaii, when he has dropped out of the University of California and Santa Cruz to surf and live with his then-girlfriend, with whom he has a painful breakup after she has an abortion and finds her LSD-addicted father in California. He later abandons a well-paying job on the railroad to travel with a fellow writer, Bryan Di Salvatore, to the South Pacific in 1978. He finds the perfect wave and an Edenic spot in Fiji, but tires of his travels when he is in Indonesia and wrestles with wanting to return to the States but thinks he must complete his unfinished novel first. In South Africa, he finds purpose while working at a black school and decides to write a book about the country under apartheid.

He then describes his years in San Francisco, when he braces cold, big waves and lives with his girlfriend Caroline (who later became his wife). He encounters a local character named Mark Renneker, who combines obsessive surfing with family medicine and who is the object of a piece by Finnegan that runs in the New Yorker. After he settles in New York, Finnegan continues to surf with fellow obsessives, and he continues, despite being a father, to practice the recklessness that has defined his approach to surfing and to reporting for a long time. He spends several winters surfing in Madeira before it becomes overbuilt and the waves are destroyed, and then he finds good surfing close to home in Long Island and New Jersey. At every phase of his life, he is at once philosophical and obsessed about surfing and, though his style and boards change over the years according to the waves, his age, and his requirements, he never loses his desire to find the perfect wave.