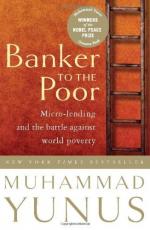 Plot Summary
+Chapters Summary and Analysis
Chapter 1, Number 20 Boxirhat Road, Chittagong
Chapter 2, A Bengali in America
Chapter 3, Back in Chittagong
Chapter 4, The Stool Makers of Jobra Village
Chapter 5, A Pilot Project is Born
Chapter 6, Expanding Beyond Jobra into Tangail
Chapter 7, A Bank for the Poor is Born
Chapter 8, Growth and Challenges for the Bank for the Poor, 1984-1990
Chapter 9, Application in Other Poor Countries
Chapter 10, Applications in the United States and Other Wealthy Countries
Chapter 11, Grameen in the Nineties
Chapter 12, Beyond Micro-credit: A New World of Grameen Enterprises
Chapter 13, Grameen Bank II
Chapter 14, The Future
Free Quiz
Characters
Objects/Places
Themes
Style
Quotes
Topics for Discussion
Order our Banker to the Poor: The Autobiography of Muhammad Yunus Study Guide

Banker to the Poor: The Autobiography of Muhammad Yunus Summary & Study Guide

Muhammad Yunus
This Study Guide consists of approximately 39 pages of chapter summaries, quotes, character analysis, themes, and more - everything you need to sharpen your knowledge of Banker to the Poor.

Banker to the Poor: The Autobiography of Muhammad Yunus Summary & Study Guide Description

Banker to the Poor: The Autobiography of Muhammad Yunus Summary & Study Guide includes comprehensive information and analysis to help you understand the book. This study guide contains the following sections:

This detailed literature summary also contains Topics for Discussion and a Free Quiz on Banker to the Poor: The Autobiography of Muhammad Yunus by Muhammad Yunus.

Banker to the Poor by Muhammad Yunus is the story of the Grameen bank program, which is founded in Bangladesh by Yunus to help the poor. In 1983, the credit program is formed to provide small loans to the poor. Yunus has a dream of helping the poor to help themselves. He feels that if they receive a little financial help in the form of a loan and are taught some basic principles of financial management, they will act responsibly and do the rest themselves. He begins to formulate this philosophy in 1976 when he comes upon forty-two women in a small village that make chairs. They need money to buy the raw supplies so he loans them $27 of his own money. They put his money to good use and develop a thriving business. On the basis of this experience, he begins to develop his theories and program to help eradicate poverty in the third world.

The basis of Yunus's theory is credit. He sees this as the key to the solution for combating world poverty. The poor need credit on favorable terms suitable to their situation. He believes in teaching them a few basics and letting them prosper. These theories form the basis for his Grameen bank, which grows to more than 250 institutions in one hundred countries. Its function is to provide small loans to those who live in poverty to help them start their own businesses.

Mohammad Yunus is an economist. He is the head of the Chittagong University's economics department at the time of the formation of his theories and plans. A famine strikes the rural areas of the country and the cities, especially Dhaka. The cities are filled with refugees, being fed out of government-sponsored food kitchens. The kitchens are not sufficient to feed the starving people and there are dying people in the streets. Yunus starts to pay attention to the situation. The year is 1974 and Yunus begins to doubt the economic theory he is teaching. He can see that the theory is a fantasy given the situation and starving people. He begins to spend time in a neighboring village learning about village life and this is what he begins to try to teach his students alongside traditional economic theory.

Once Yunus begins learning the real life problems of the poor, he begins to try to formulate solutions to the problems. This is how he forms the philosophy leading to the Grameen bank credit programs. One of the successful solutions he develops is small loans to help people start cottage industries. The program he formulates becomes the basis for an international program of lending to the poor in the war against poverty in the third world.

This fascinating book reads like a novel. The author first shows his literary talent at the age of eleven when he writes a mystery story. This book is well worth the time spent reading it.

More summaries and resources for teaching or studying Banker to the Poor: The Autobiography of Muhammad Yunus.

Banker to the Poor: The Autobiography of Muhammad Yunus from BookRags. (c)2022 BookRags, Inc. All rights reserved.