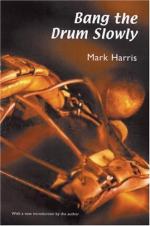 Mark Harris (author)
This Study Guide consists of approximately 33 pages of chapter summaries, quotes, character analysis, themes, and more - everything you need to sharpen your knowledge of Bang the Drum Slowly.

This detailed literature summary also contains Topics for Discussion and a Free Quiz on Bang the Drum Slowly by Mark Harris (author).

Henry and Bruce are both baseball players in the 1950s who play for a team called the New York Mammoths. Bruce shocks Henry with the news that he has a deadly disease and will probably die soon. Henry tries to come to terms with this while he also plays baseball and awaits the birth of his first child.

During the off-season, Bruce calls Henry up and tells him to come see him in Minnesota, where Bruce is in the hospital. Henry learns that Bruce has Hodgkin's disease, a cancer of the blood, and that he is certainly going to die. Henry agrees to keep this a secret, worrying that Bruce will be fired as soon as Dutch, their manager, finds out. When spring training starts, Henry delays signing his contract, asking for more money, and insisting that he and Bruce stay together, no matter what happens. Dutch is annoyed, and keeps trying to figure out what Henry and Bruce's big secret is, even hiring a detective.

The season starts, and the Mammoths are the best team in the league. They still have their problems, and Dutch complains about their lack of team unity. Most of the players tease Bruce a lot, because he is rather stupid, and Henry tries to get them to be nicer to Bruce. Little by little the secret leaks to more and more people on the team, and Henry can always tell when someone has found out, because they suddenly start being nice to Bruce. The other players play cards with him, drink with him, and sing songs with him. None of them want to admit why, and no one talks openly with Bruce about his condition.

When Henry is not playing baseball, he supports his wife by selling insurance to baseball players. Henry's wife, Holly, goes into labor, and by the time he gets there, he has a daughter, whom they name Michele. Around the same time, Bruce's mother dies, and the team sends flowers to her funeral. Bruce is in love with a prostitute named Katie, and he asks her to marry him. When Katie learns about the huge insurance policy that Henry has sold to Bruce, she agrees to marry him. Bruce asks Henry to change the beneficiary on his insurance policy to Katie, but Henry suspects that she is only trying to swindle Bruce, so he only pretends to change it. Katie does all she can to get Henry to change the form, but he never does.

On Labor Day, Bruce is not feeling well, but he manages to play half a game before falling unconscious. Henry accompanies him to the hospital, worried that he will die that night. He does not, but sits on the bench for the first half of the World Series, cheering his team on. He goes home with his father, and the Mammoths win the Series. Soon after, Bruce dies.

More summaries and resources for teaching or studying Bang the Drum Slowly.