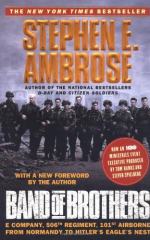 Stephen Ambrose
This Study Guide consists of approximately 39 pages of chapter summaries, quotes, character analysis, themes, and more - everything you need to sharpen your knowledge of Band of Brothers.

Band of Brothers is a non-fiction historical account of the U.S. Army's Easy Company during World War II. A part of the elite 101st Airborne Division, Easy Company participated in the Normandy D-Day invasion and was the first group of Allied troops to reach Hitler's Eagle's Nest retreat in Germany as the German troops surrendered.

Easy Company was formed by volunteer soldiers. The men were from different part of the U.S. with varying socioeconomic backgrounds and education levels. The majority of men had no military experience and had never traveled outside of the U.S. The original members of Easy Company began basic training at Camp Taccoa, Georgia. Easy Company's original commanding officer, Captain Herbert Sobel, was demanding and trained the men harder than any other company in the regiment. However, he was also arrogant and unlikable.

The men of Easy Company began to bond under Sobel's tyrannical command. The soldiers looked up to 2nd lieutenant, Richard "Dick" Winters. Winters was humble, fair and likable. Unlike Sobel, Winters demonstrated excellent leadership potential. The men completed basic training in outstanding physical shape. Easy Company continued to parachute jump training. Sobel continued to infuriate the men during training exercises due to Sobel's inadequacies in the field. Sobel struggled to even read a map correctly. Eventually, Sobel was replaced as Easy Company's commanding officer after a group of non-commissioned officers threatened mutiny.

Easy Company began its campaign by participating in the Allied invasion into Normandy, known as D-Day. In France, Easy Company flourished under Winters's leadership. First, Winters led a successful attack again a German battery of four heavy machine guns with only twelve men. Then, Winters inspired Easy Company to move into the town of Carentan while under enemy machine gunfire and usurp the occupying German troops. Due to Winters's excellence on the battlefield, he was quickly promoted to Captain. The soldiers of Easy Company received a short reprieve before entering Holland for Operation Market-Garden, an attempt to capitalize on the German army's weakened condition after the D-Day invasion. The Allied operation proved unsuccessful, and Easy Company endured many casualties. The men continued to fight in Holland, then again in France. A siege in Bastogne, France found Easy Company surrounded by German soldiers. For twelve days, Easy Company slept in foxholes, suffering in the extreme winter elements with no cold weather gear. At the same time, the men were inundated with deadly artillery attacks. Eventually, the U.S. Army broke through the lines to rescue Easy Company. The men insisted that no rescue was necessary. Easy Company gained elite status in the American public as heroes for the siege which was heavily promoted in the media.

Easy Company continued to fight on the front lines through France. Eventually, the company entered Germany. Surprisingly, the American soldiers liked the German people. The war was nearing an end, but Easy Company remained cautiously optimistic. As the company traveled into Germany, the men encountered scores of surrendering German troops. Easy Company was involved in a few minor skirmishes, but encountered relatively little resistance. The men encountered their first concentration in the foothills of the Alps. Continuing on, Easy Company trekked to Berchtesgaden, where Hitler had a luxurious mountaintop retreat. As the first company at Hitler's Eagle's Nest, Easy took the liberty of looting Hitler's old refuge and nearby Nazi homes.

After the war in Germany ended, the men lived in luxury in Austria. However, the soldiers became bored without combat and were anxious to return home. There was frustration with the way the Army handled choosing who would be discharged. The Army initiated a point system based on medals conferred and time in combat. The soldiers were frustrated with the bureaucracy. Also, the boredom and relief led to heavy drinking. Accidents and altercations occurred due to drunk driving and public drunkenness. Easy Company was slowly broken up as men were discharged. Nearly three years after its inception, Easy Company was officially inactivated.