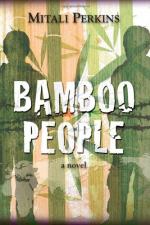 Mitali Perkins
This Study Guide consists of approximately 44 pages of chapter summaries, quotes, character analysis, themes, and more - everything you need to sharpen your knowledge of Bamboo People.

"Bamboo People" by Mitali Perkins is the story of two teenage boys who are on opposing sides of the unrest between the government of Burma and the tribal people in remote areas of the country. As the story opens, Chiko, a fifteen-year-old Burmese boy who lives in Yangon, Burma, with his mother, is sitting outside reading the newspaper. He is excited about an opportunity that he reads about. The government is holding interviews for teaching positions. He can read and write both Burmese and English, has tutored students, and was home-schooled by his physician father, Joon. He is sure that he is qualified for the role.

Just when Chiko is about to tell his mother, Wei-Lin, about the job openings, she scolds him for being outside and reading out in the open where a government agent or the police could see him. He hurries inside and hides the book in a safe that his father built. His mother's warning makes Chiko sad because it calls to mind the reality of his family's current status. The police arrested Joon four months before. They had caught him leaving his house at night to treat a sick man who was a member of the resistance. Chiko and Wei-Lin have no idea if Joon is still alive or dead. On the advice of Daw Widow, a family friend, Chiko decides to apply for one of the teaching positions. Before he leaves Daw Widow gives Chiko photos of his father and of her daughter, Lei, who Chiko is smitten with.

The "job opening" ad was a ruse and used to lure young men as recruits for the Army. Chiko and other young men standing in line to apply for a job were apprehended and taken to a Army recruitment camp. The camp was more like a prison than a military training camp. Chiko made a good friend of Tai, a fifteen-year-old orphan who lived on the streets of Yangon with his younger sister. The two young boys are beaten and punished during their time there. Chiko looks at the photos Daw Widow gave him to find comfort and see him through his ordeal. Chiko volunteers to go on a mission in the dense jungle surrounding the camp. Chiko and four other Burmese soldiers are the victims from the blast of a land mine.

Tu Reh, a sixteen-year-old Karenni boy, is on his first mission in the jungle. The Karenni tribe lives in remote areas of Burma and are considered dissidents and rebels by the Burmese government who wants to eliminate them and take over their land. Tu Reh and the other members of his unit stop in their tracks when they hear a terrible explosion. Tu Reh and his father, Peh, who is leading the mission, explore the area and find four dead Burmese soldiers and one soldier who is badly injured - a vbone is sticking out of his mangled leg.

Peh has always taught his son not to kill another human being unless there is no other choice. He gives his son the task of deciding what to do with the boy. Tu Reh, like most Karennis, hate Burmese soldiers. They burned his house and village down. But as he gazes upon the injured young boy who looks younger than he, Tu Reh decides to take him to a healer. The healer tends to him but decides he must be taken to the Karenni camp where a physician can amputate the leg if it becomes infected. At great risk to themselves, Tu Reh, the healer and her family, rig a stretcher and take him through the jungle to the camp.

Although Tu Reh had only revenge in his heart for Burmese soldiers, he decided that a young boy's life transcended politics and war. He was harshly criticized by other tribe members but in the end he knew he did the right thing. Tu Reh and Chiko grew close over the days during Chiko's ordeal. After Chiko recovered enough to leave the camp, the two bonded and before leaving to go their separate ways, had both expressed the hope to meet again some day. In fact, Chiko's said his last words to Tu Reh in Karenni: "Goodbye, brother."

More summaries and resources for teaching or studying Bamboo People.