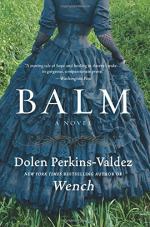 Dolen Perkins-Valdez
This Study Guide consists of approximately 53 pages of chapter summaries, quotes, character analysis, themes, and more - everything you need to sharpen your knowledge of Balm.

This detailed literature summary also contains Quotes and a Free Quiz on Balm by Dolen Perkins-Valdez.

The following version of this book was used to create the guide: Perkins-Valdez, Dolen. Balm. HarperCollins Publishers, 2015.

Part One introduces three main characters: Madge, Sadie, and Hemp. All three found themselves in Chicago, IL at the end of the Civil War. They experienced vastly different lives as a black freeborn woman, white widow, and former male slave. Sadie and Madge interacted shortly after Sadie discovered she could hear the spirit of Private James Heil in her mind. She watched Madge's street performance and immediately offered her a job with the intention of making a friend, and Madge accepted the offer. Sadie was summoned home to York, PA upon her mother's death, but she and her father did not get along. She resented that he exchanged money for her engagement. Upon returning home, Sadie realized that Madge was not a believer in nor open to friendship.

Hemp earned the title of deacon at his local church, and he attended a séance at the church. There, Sadie's reading led him to believe that Herod, Annie's daughter, spoke with news that Annie was still alive. He went to Sadie's home for a private séance, but she detected something he did not want to discuss. When he left, Madge followed him home. She waited outside to interact with him when he came to visit Richard, who suggested he escort her to a prairie to gather herbs. Though the prairie was a disappointment for Madge, they each shared snippets of their pasts. After that day, Hemp visited Madge every Sunday to talk. Eventually they went for a walk, on which Madge initiated a kiss that Hemp did not reciprocate because of his marriage. Hemp fell deliriously ill with heartache and Madge tended to him. After his bath, Madge allowed Hemp to believe he was Annie when they had sex.

Part Two begins with the declaration of a marriage proposal between Sadie and Michael. They met when Michael requested a private séance to speak to his late brother, Private James Heil. He became obsessed with this connection, and he escorted Sadie around the country for her readings, introducing her and taking suggestions from the audience. Sadie became known as the Widow, and her persona overtook her identity. She made a marriage proposal to Michael hastily and with uncertainty, fleeing after she asked. After some time went to Sadie's to accept, but Madge first tended to his wounded ankle. She was running a healing business outside of Sadie's kitchen and sold him the soothing oil. She spoke to him about Hemp, his new driver, and his past. Michael responded with an intense urge to help to reconcile paying his way out of serving in the Civil War.

Sadie's physical body was being taken over by James and Olga and Madge called upon her father to visit. When Madge returned, she engaged in sexual relations with Hemp that left her feeling emotionally empty and wishing for Tennessee. The next day, Michael begged Sadie to contact James so he could confess his secret of his safety, but Sadie wished to cease contact with James and claimed he was no longer there. Soon after, Sadie discovered Madge's business affairs, but kept her on staff. Ironically, Madge resigned to return to reconcile with her mother in Tennessee. Sadie's father arrived and they immediately disagreed about their beliefs. He accused her of lying about her abilities, even after she summoned her mother without James's mediation. He negated her womanhood and scolded her for not acting appropriately as a woman, upon leaving the house is anger, he fell and broke his ankle.

Part Three begins with Madge's return to Tennessee. Though the sisters did not welcome her warmly, she eventually earned their respect. Her mother lost her eyesight after soldiers looted their home and was tender toward Madge. She gave her the affection and validation for which Madge had always longed, propelling her into her own future with confidence. She decided to move back to Chicago. In the city, Michael launched his plan to help Hemp find his wife, a process that was unexpectedly illuminating for him. Hemp was confused by the new world around him and could not stop thinking about Madge despite his commitment to Annie. The next time he and Michael visited Peter, he admitted he did not want to help them. Hemp wandered down dark alleyways, drinking and feeling despair. He acquired discarded lumber and carved a cross decorated with flowers, walked it to the church cemetery, and buried it to say goodbye to Annie’s memory.

Michael escorted Sadie’s father home from the hospital and he and Sadie both declined the marriage proposal. Her relationship with her father did not mend the way she wished but she decided to keep trying. When Michael returned home, Peter stopped him on the street with word of Hemp’s family. Madge was welcomed by all upon her return and visited Hemp straightaway at his church, where he proposed. They were married by the revered, who after asked Madge to touch the members of her community with her hands. She was reluctant at first but was reaffirmed of her faith in hope. Michael attended the reception with Herod, who apologized to Hemp for their past. The three were able to reconcile, and each main character found freedom the way they wished: Hemp remembered his given name, Thomas, Madge married Hemp and made remedies in Sadie’s home, and Sadie remained a single medium.

More summaries and resources for teaching or studying Balm.