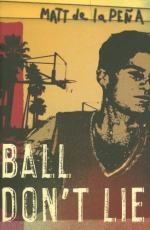 Published in 2005, "Ball Don't Lie" is the first of four young-adult novels by Matt de la Peña. The book is a gritty coming-of-age story of a troubled throwaway named Sticky (his real name, Travis Reichard, is rarely used). Now seventeen, Sticky bounces from one foster home to another as repeatedly as the dribbled basketball that is his talisman and ticket out of the ghetto. The boy suffers from obsessive-compulsive disorder that was spawned by a traumatic incident he witnessed as a seven-year-old: his birth mother's suicide when she slashed her wrists in their apartment's bathtub. Since then, Sticky has bottled up his feelings, except for indulging his passion for basketball, haunting the hoop courts at Lincoln Rec, a squalid public gym in the bowels of East Los Angeles. There, in the homeboy camaraderie of pickup ball games with its marginalized but likeable denizens, Sticky finds his only true purpose and transcendence—even though he is the only white boy among the people of color who inhabit the novel. Street-smart and resourceful, the boy routinely engages in shoplifting and petty thievery to get by, until his life is turned around by the one person who believes in him, his sixteen-year-old sweetheart, Anh-thu (also known as "Annie."). Anh-thu, a half-Vietnamese girl whose mother abandoned her at the age of six, is a smart and sensitive girl who befriends Sticky when he tries to shoplift some jeans from the clothing boutique where she works.

The action mostly takes place during the six-month period of Sticky and Anh-thu's relationships, but the narrative is frequently interspersed by flashbacks to Sticky's boyhood and his succession of foster homes. Anh-thu provides the only tenderness Sticky experiences during a period divided between the basketball courts of Lincoln Rec and the brutal streets of East L.A. Sticky and Anh-thu have sex in various public locales—under a highway bridge and in a public restroom—resulting in her becoming pregnant, but this is presented only as a minor episode. Thanks to her gentle presence, Sticky begins to reflect on his life for the first time and resolves, though without success, to stop his life of petty crime and obsessive-compulsive behavior. He is selected for a prestigious basketball camp, but just before he goes, he reverts back to his criminal behavior in order to buy a birthday bracelet for his girlfriend. Sticky goes to an ATM and robs a man at knife point, netting $400. The man, a drug dealer, catches up with Sticky as he sat nearby counting the bills over and over and over again. A scuffle ensues, and Sticky is shot in the wrist of his ball-shooting hand. As he recovers in the hospital, with Anh-thu at his bedside, Sticky is able to cry and let out his feelings for the first time since his mother's death a dozen years earlier. The cathartic experience is profound, causing Sticky to finally settle into his body and accept himself for who he is.