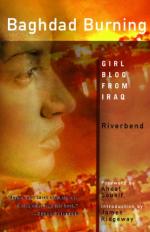 Riverbend (blogger)
This Study Guide consists of approximately 37 pages of chapter summaries, quotes, character analysis, themes, and more - everything you need to sharpen your knowledge of Baghdad Burning.

Riverbend is seemingly young and only 24 at the time of the Second Gulf War and the subsequent Occupation and her entries reflect a young person's struggle to understand and survive what is happening around her as her country is literally blown apart by the opposing sides in the ongoing 'War Against Terror'. At times defiant and angry, whilst at others sympathetic, weary or heartbroken, Riverbend's account of this year covers the full range of human emotions and the individual entries weave together to form a narrative of sorts of what happened in the first year of the Occupation, but told from a civilian in Iraq, and not a 'sponsored' or 'sanctioned' nor 'embedded' journalist.

Riverbend starts her online blog talking about the installment of what she names 'the Puppet Council' (the GC, or the Governing Council of presidential candidates selected by the CPA, or Cpalition Provisional Authority). Her blog starts to analyse and respond to events in the news and attempt to decry the propaganda that she sees taking over her country. In amongst these highly intelligent and witty articles are accounts of her home life as a young woman in Baghdad, including all the small minutiae of life from the pre-Eid cleaning to sleeping on the roof and the making of traditional Iraqi food.

As her account continues, Riverbend sees her home city of Baghdad changing around her, swinging to a more fundamentalist interpretation of custom and she starts to be scared to go out of the house. Meanwhile friends, relatives and neighbours tell her of stories of kidnappings, accidental killings, and internments in the dreadful Abu Ghraib Prison.

As her narrative goes on, Riverbend responds to emails and criticism online, making the story very much an 'active' and almost a 'participatory' one, reflecting the immediate and often chaotic nature of the news and war journalism. Riverbend herself muses on the past and what the future has in store for her family and her country as History rolls itself out around her; from the political instability of the Governing Council to the uprising of Moqtadr Al-Sadr in the south. The American siege of Fallujeh and the terrible events at Abu Ghraib, Nick berg and the numerous high profile kidnappings. Throughout all of this Riverbend unerringly expresses an everyman and everywoman view from that of an ordinary Iraqi, and reflects, we must presume, what many civilians were thinking and fearing at the time of the occupation.

By the end of the narrative, Riverbend and her family has survived, but we can see that the war and the occupation has changed her and her family considerably. By the final few passages we meet a mature, weary woman whose honest dialogue forces us to ask questions about the meaning of the words Occupation, Liberation, and Civilian.