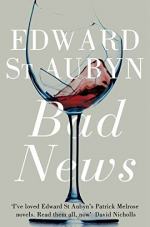 The novel takes place over the course of about 48 hours in New York City in the year 1982. At the beginning of the novel, 22-year-old Patrick Melrose arrives by plane in New York City, having traveled from England. Patrick is the son of wealth members of upper-class British society.The passenger next to him is a wealthy, gregarious American named Earl Hammer, whom Patrick finds irritating. Patrick has come to New York to collect the remains of his recently deceased father, David Melrose. David was a generally abusive father, and Patrick’s feelings towards David are defined by a mixture of hatred and reflexive loyalty. Patrick is generally self-destructive and is addicted to heroin and cocaine. His significant other is woman named Debbie, although he has been having a secret sexual affair with a woman named Kay.

After checking in to his hotel in New York and buying some illegal pills from a drug dealer, Patrick briefly visits Anne Eisen, a friend of his family. Anne invites Patrick to a social gathering, but Patrick declines. Patrick goes to dinner by himself. After learning of his father’s death, he resolved to stop taking heroin. During the dinner, Patrick drinks excessively, and he soon decides to buy heroin. He calls his usual New York drug dealer, Pierre, but Pierre does not answer the phone. Patrick then takes a taxi to another part of the city and buys heroin from a street dealer called Chilly Willy. To Patrick’s chagrin, he injects the heroin improperly and misses his vein. After he returns to his hotel, he calls Pierre again, and this time, Pierre answers. Patrick goes to Pierre’s apartment and buys heroin and cocaine. Patrick injects himself with cocaine and a little bit of heroin. When Patrick returns to his hotel room, he has vivid, frenzied hallucinations in which a large number of imagined figures speak to him.

Patrick eventually falls asleep and awakes early in the morning. He makes phone calls to people in England: Debbie, Kay, and his friend Johnny Hall. Patrick receives a phone call from George Watford, a friend of his father. George invites Patrick to lunch, and Patrick accepts. Patrick notices that one of his eyes has become inflamed, so he buys an eye patch. Patrick has lunch with George and two other men at an upscale social club. Patrick dislikes it when George says positive things about David Melrose. Patrick goes to the restroom to inject himself with cocaine. He soon vomits and leaves without saying goodbye to George.

Later, Patrick goes to the funeral home to collect his father’s ashes. That evening, he has dinner with Marianne, an American woman who is a friend of Debbie. Patrick is sexually attracted to Marianne, but Marianne acts reticent towards Patrick. Patrick later goes to a nightclub in search of a sexual partner. Patrick meets a young woman named Rachel, and Patrick and Rachel then go to Patrick’s hotel room. However, Rachel decides that she does not wish to have sex, and she falls asleep on the bed. In the morning, Patrick gathers all of his belongings and leaves without waking Rachel. Patrick checks out of the hotel and enters a limousine to return to the airport.