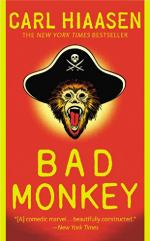 Carl Hiaasen
This Study Guide consists of approximately 44 pages of chapter summaries, quotes, character analysis, themes, and more - everything you need to sharpen your knowledge of Bad Monkey.

Bad Monkey tells the story of Andrew Yancy, a recently suspended detective, who has been demoted to restaurant inspector. After a severed arm is turned in to the morgue, Yancy decides to investigate what happened as a way to earn his reinstatement to the police department.

Yancy lives in Big Pine in the Florida Keys and is disappointed by the large mansion that is being build next door to him. He finds new and clever ways of scaring off potential buyers by leaving dead animals, a bee hive, and occult symbols in the house. He even pretends that he has been attacked by wild dogs.

While Yancy juggles his pranks at the house next door and his former lover Bonnie, he begins to suspect that the severed arm actually belongs to a murder victim. Yancy tries to convince the sheriff to reinstate him, but Yancy’s assault on Bonnie’s husband prevents the sheriff from doing so. With the help of Rosa, a medical examiner in Miami, Yancy starts to put together clues about what happened.

Nick Sterling, the victim, was involved in a medical insurance scam and was under federal investigation by the IRS. Leaving behind Caitlin, Nick’s estranged daughter, and Caitlin’s stepmom Eve, Nick is legally declared dead. When Caitlin encounters Yancy at the funeral, Caitlin accuses Eve of killing Nick to inherit a $2 million life insurance policy.

As Rosa helps Yancy with his investigation, the two begin a relationship. Rosa tends to Yancy’s wounds when he is attacked by a masked man Yancy believes is involved with Nick’s death. Yancy uncovers information that Eve and a rumored boyfriend are hiding in the Bahamas. Yancy and Rosa travel to the Bahamas where they pretend to be a married couple looking to buy property.

Rosa goes to meet Christopher Grunion, a developer who has taken land from Neville, a local man who has employed the services of a voodoo woman called Dragon Queen. When the voodoo does not work, Neville returns to Dragon Queen for more spell work. Dragon Queen asks for sex in exchange for the voodoo. When Neville refuses, she takes Neville’s pet monkey Driggs as payment.

Yancy investigates Eve while he is on the island. He becomes concerned for Rosa’s safety when she does not return from the meeting. With a hurricane coming ashore, Yancy goes looking for her and discovers Rosa is being held by Eve and Nick. Nick faked his death to get away from federal investigation and collect on his life insurance policy. While Nick holds Yancy at gunpoint, Neville arrives in time to stab Nick and rescue Yancy and Rosa.

Unsure of Nick’s fate, Neville worries what will happen. In speaking to Yancy, Neville learns that Christopher Grunion is a pseudonym from Nick Sterling. Yancy and Rosa return to Florida. Nick and Eve are killed trying to leave the Bahamas, with Nick dying in the same way he faked his death.

More summaries and resources for teaching or studying Bad Monkey.