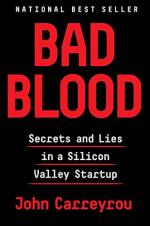 John Carreyrou
This Study Guide consists of approximately 69 pages of chapter summaries, quotes, character analysis, themes, and more - everything you need to sharpen your knowledge of Bad Blood.

The following version of this book was used to create this study guide: Carreyrou, John. Bad Blood: Secrets and Lies in a Silicon Valley Startup. Alfred A. Knopf, a division of Penguin Random House LLC. New York, NY, 2018. First edition. The first three-quarters of the book is written in journalistic, objective, third-person language, and describes the origins and growth of Theranos, a Silicon Valley startup lead and controlled by young Stanford dropout Elizabeth Holmes. The final quarter of the book is written from the more personal, more subjective, first-person perspective of the author, and narrates events surrounding his writing of a series of articles for the Wall Street Journal about Theranos and Holmes.

In a prologue, narration describes how the former chief financial officer of Theranos was summarily fired by Elizabeth Holmes after raising concerns about the company’s products and practices. Narration then shifts into the past, describing Elizabeth’s family history, which led to both her desire to make a great deal of money and to do so by doing the most good for the most people. The narrative then returns to the period around the firing of the chief financial officer, focusing on the hiring of a new chief engineer, the growth of his own suspicions, and his own eventual departure from the company.

The remainder of the narrative’s first section then follows a chapter-by-chapter pattern of tracking the financial growth, the commercial successes, and the scientific struggles of Theranos, the increasingly volatile nature of the work environment, and the increasing fame of Elizabeth Holmes. That pattern also includes considering all the above-referenced elements within the context of the arrival, disillusionment, and departure of a string of employees. The stories of these employees include those of a scientist (Ian Gibbons) driven to suicide by the demands of working for the company; those of a pair of younger scientists (Tyler Shultz and Erika Cheung) whose concerns about Theranos and its operations led them to desperate attempts to inform others about those concerns; and a former lab director (Alan Beam), whose eventual departure from the company was defined by a reluctance to keep defending it against complaints from physicians unhappy with its practices.

Eventually, an increasing number of serious concerns and informal investigations draws investigative journalist (and the author of this book) John Carreyrou into the Theranos story. The story of Carreyrou’s involvement, told from the first-person perspective of the author, is told in the book’s final quarter. After being tipped off about Theranos and Holmes by a colleague, Carreyrou begins his own investigations. Utilizing the information given to him by Beam, Shultz, Cheung, and other sources, he prepares and publishes a series of news articles about Theranos and Holmes in his paper, the reputable Wall Street Journal. Attempts by Theranos and its attorneys to keep the articles from being published fail, with their publication leading to investigations by important government agencies. Those investigations, in turn, result in the failings of Theranos, as both a health care provider and as a company, being revealed to the public. This, in turn, leads to the company losing its value and reputation, and to the possibility of criminal charges.

The narrative concludes with an epilogue in which Carreyrou briefly considers the psychology in Elizabeth Holmes that might have led her into making the choices she did, and offering the suggestion that in spite of appearing to have been controlled and manipulated by others (particularly Sunny Balwani), the evidence suggests that she knew exactly what she was doing right from Theranos’s beginnings.

More summaries and resources for teaching or studying Bad Blood.